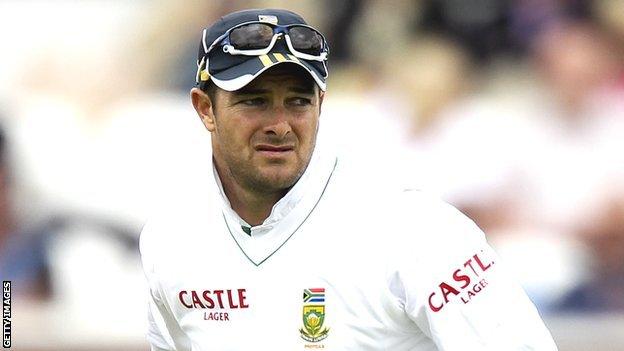 South Africa wicketkeeper Mark Boucher has retired from international cricket after sustaining an eye injury during the tour of England.

The 35-year-old was struck by a bail while standing up to the stumps on day one of the tour match with Somerset.

In a statement, delivered by Proteas captain Graeme Smith, Boucher said he faced "a road of uncertain recovery."

Boucher played 147 Tests and currently holds the world record for most dismissals by a wicketkeeper with 555.

He also claimed 425 dismissals in one day internationals.

"It is with sadness, and in some pain, that I make this announcement," said Boucher in his statement. "Due to the severity of my eye injury, I will not be able to play international cricket again.

"I had prepared for this UK tour as well, if not better than I have prepared for any tour in my career. I had never anticipated announcing my retirement now, but circumstances have dictated differently.

"I would like to thank the huge number of people, many of whom are strangers, for their heartfelt support during the past 24 hours. I am deeply touched by all the well wishes. I wish the team well in the UK, as I head home and onto a road of uncertain recovery."

Boucher added on Twitter: "Your support for me has brought me to my knees. I can't thank you all enough.

"Gonna be a tough time for me regarding my eye but I will pull through. Retirement had to be called a bit early, but thanks to everyone for all the good times and tough times. You have all contributed and I'm truly blessed."

Proteas skipper Smith gave a personal message of his own to his team-mate of 14 years.

"I suffered a similar injury to Mark during a Sunday League match in 1990, when the bail hit me in the eye. Although my injury doesn't sound as bad as Mark's, I was in hospital for one week and there were doubts about whether my sight would return. Gradually it did return, but I was left with some blurred vision in one eye. I played about half a dozen games after my injury, but it was clear I had lost my perception. Fortunately, it has not affected my every day life. I can still read and drive etc - the brain is a wonderful thing and it compensates for the injury."

Former England wicketkeeper Paul Downton, who now works as a stockbroker in the City.

"Bouch, we have walked a long road together, and we are saddened to part under these circumstances," he said.

"For the 14 years of your international career, you have been a true Proteas warrior, a patriotic South African, a fighter who asks nothing and gives everything.

"You leave us today with sad hearts, but also with a deep gratitude for your contributions to our team, and to us as people.

"The fighting spirit you brought to the team remains with us. We wish you a good as possible recovery from your injury. As we bid you a farewell as an international cricketer and wish you well for your future, we keep you as a friend and respected Proteas warrior."

Team-mate Jacques Kallis added: "All we can do is to be there and support him. He seems to be in good spirits and we know he will be in good hands. He has our well wishes as he has done from all around the world."

Boucher, who was on his fourth tour of England, suffered the freak injury on Monday when he was struck by a flying bail while standing up to leg-spinner Imran Tahir on the opening day against Somerset.

"You don't stay in a side like South Africa if you are not a top-class player. His glovework was excellent and he was a great fighter with the bat. He scored valuable runs and used to get South Africa out of trouble on numerous occasions coming in at number seven."

He was initially treated on the pitch before being taken to Taunton hospital where he underwent surgery on a lacerated eyeball.

Boucher has since been discharged from hospital and will travel home on the earliest available flight. His eye is still too swollen for a long-term prediction to be made about possible effects on his sight.

After visiting Boucher in hospital, South Africa's team manager Dr Mohammed Moosajee told Cricinfo: "The extent of the eye injury can be described as severe. The eyeball was repaired during the operation.

"The long-term prognosis at this stage remains unknown."

The injury is similar to one suffered by England and Middlesex wicketkeeper Paul Downton, who was forced to retire in 1990 after being struck in the eye by a dislodged bail.

Cricket South Africa have announced that a replacement for Boucher for the tour of England will be made on Wednesday.

South Africa have called up specialist keeper Thami Tsolekile to replace Boucher for the tour of England, although AB de Villiers is expected to take the gloves for the first of the three scheduled Tests, which starts at the Oval on 19 July.