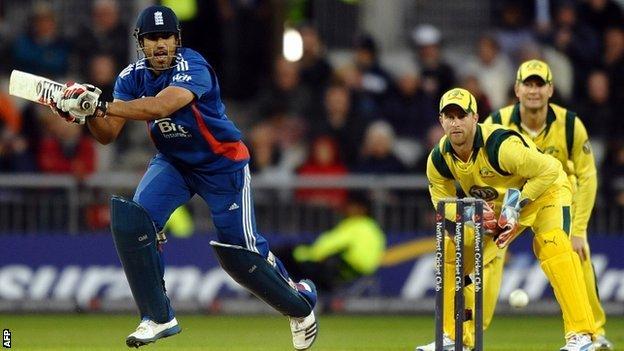 England strolled to a seven-wicket win over Australia at Old Trafford to complete a 4-0 series victory.

"It has been such a one-sided contest. It's easy to sit here and say how good England have been, but you also have to look at Australia and ask what direction they are going. They have got a lot of work to do, they have been hammered."

Australia had earlier been restricted to 145-7 from their 32 overs - the game originally shortened after rain delayed play until 17:30 BST.

The defeat completes a miserable tour for the visitors, who were spared the threat of a 5-0 whitewash when the third one-day international at Edgbaston was abandoned.

That denied England the chance to claim the clean sweep that would have taken them to the top of the world rankings, but Cook's men have the comfort of having now racked up 10 successive ODI wins - a team record.

Given England's poor one-day record both overseas and in World Cups, any potential climb to the top of the rankings would have come with questionable credibility, but their dominance over the current world leaders in this series has been total.

And, apart from a trio of dropped catches in the opening stages in Manchester, Cook's side were again far superior to the tourists.

Man of the match Ravi Bopara: "The lads played really well. The pitch was a little bit 'stoppy' but I think it got better as the night went on. It was important that I got an early knock and that one at The Oval gave me confidence and stood me in good stead for the series."

England captain Alastair Cook: "We all know what a quality player Ravi Bopara is, and he is starting to deliver for England now. Our number seven batsman didn't get a bat in this series, so that shows how much credit we should give to our top order batsmen in this series."

Man of the series Ian Bell: "I think it helped that out bowlers set the tone. It's always nice to chase lower totals. I think opening suits my style of play and I am developing a nice partnership with Cookie. Hopefully we can take that on in the future."

Australia captain Michael Clarke: "We have no excuses, we came here to win all five games. I don't want to take anything away from England, but I will make sure we are as well prepared as we can possibly be for the Ashes."

Bowling first in helpful conditions, England - in the shape of James Anderson and the recalled James Tredwell - dropped Matthew Wade twice, before Samit Patel spilled an easy chance from David Warner on the third man boundary.

Tredwell, in the side as Tim Bresnan rested a sore elbow, made amends by pinning Warner lbw, as Australia capitulated.

In the space of 10 balls, Australia saw Peter Forrest run out diving to make his ground, Wade stumped running past one that turned from Tredwell and captain Michael Clarke run out by an Eoin Morgan direct hit.

On a pitch that offered carry to the pace bowlers, it was the off-spin of Tredwell and the medium pace of Bopara that then put the squeeze on Australia in the middle overs.

Bopara, whose bowling has often yielded bonus wickets for England throughout the series, had Steve Smith caught down the leg side from his first ball then enticed David Hussey to feather a catch through to Craig Kieswetter.

It was left to George Bailey to try and carry the Aussies to a respectable total.

With James Pattinson for support, he lifted Tredwell for six over long-on then repeated the dose to Anderson in the final over of the innings but, despite Bailey's 41-ball 46, the tourists looked well short of a competitive score.

"The Australia batting line-up doesn't look like a number-one ranked side. If you put Mike Hussey into the team, it changes it a bit, but losing Ricky Ponting at number three has left a big hole. You can't replace those two easily."

Their hopes would have been raised when Ian Bell and Jonathan Trott gifted away their wickets - Bell chipping Clint McKay to mid-wicket and Trott, after a rain delay, playing across one that turned from Clarke - but, from there, Cook and Bopara took control.

Both Essex men were strong through the off side, Cook driving and cutting, while Bopara's accumulation was punctuated by some eye-catching driving off the front and back foot.

For Cook, it was a continuation of the form he has shown since taking over the captaincy last summer, while Bopara's displays could now leave him in line for a recall for the first Test against South Africa.

Such was England's comfortable progress, it came as a surprise when Cook edged Ben Hilfenhaus to slip but, by then, a deflated Australia had already long since been defeated by an England team that continues to improve in one-day cricket.