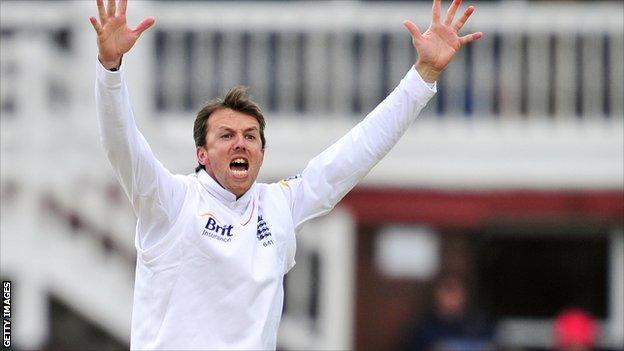 Off-spinner Graeme Swann has had a cortisone injection in his right elbow in a bid to be fit for England's Test series against South Africa.

The 33-year-old, along with seamer Tim Bresnan, who has a similar injury, was rested during the one-day series win over Australia.

"With the combination of rest and the injection, Swann should be fit for the Test."

Swann played a single one-day international for England in 2000 but was discarded by Duncan Fletcher and had to wait until 2007 for another chance. Since February 2009, he has played 42 consecutive Tests.

England will lose their spot at the top of the world rankings to second-placed South Africa if they are beaten in the three-Test series, which begins at The Oval on 19 July.

Nottinghamshire bowler Swann, who has taken 188 Test wickets, needs only five more to draw level with Jim Laker as England's most successful off-spinner.

Bresnan, who has never tasted defeat in the 14 Tests he has played for England, had elbow surgery earlier this year and was forced to miss the series against Pakistan in the United Arab Emirates.

With England set to field a four-man attack, they would be unlikely to risk either player if they were not confident that they could complete a Test.

Bresnan, 27, played in all three Tests against West Indies earlier in the summer, but Steven Finn strengthened his claims for a Test recall with a series of outstanding displays against Australia.

Swann has not missed a Test since the West Indies tour of 2009. Slow left-armer Monty Panesar is a leading contender to replace him, although he has not featured in a Test in England since the 2009 Ashes.

Flower added: "Our medical staff believe [Swann and Bresnan] will be fit and available for selection for the first Test.

"But it's a strenuous exercise, being a bowler playing international cricket.

"They play all three forms of the game. That's why Swann missed a big part of the one-day series and why we rested Bresnan on occasion."