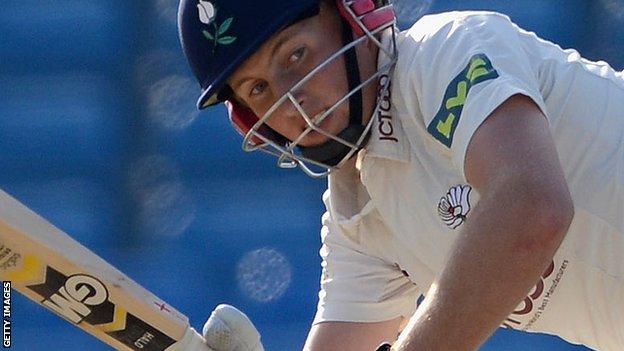 Joe Root hit an unbeaten 46 but Jonny Bairstow was out for a golden duck as Yorkshire's match at Hampshire was again affected by rain.

After day one was washed out, only 26 overs were bowled on Thursday and the visitors were in trouble on 28-3.

Bairstow, whose place in the England team for the first Test with South Africa next week is under threat, was bowled by Kabir Ali (2-13).

But Root hit six fours to steer Yorkshire to 83-3 before the close.

The second day's play got underway on time and it was Yorkshire who were soon in trouble.

Bairstow, sent back to play for Yorkshire to find form and try and get some runs, arrived at the crease with the visitors on 28-2 after Australian Phil Jaques was dismissed for 12.

Kabir, getting plenty of assistance from the pitch, forced Bairstow to prod nervously at his first delivery and wicketkeeper Michael Bates completed a comfortable catch.

With Essex's Ravi Bopara offering a strong alternative after his in the recent one-day series, under-threat Bairstow could hardly have offered a worse riposte.

Rain soon returned to Southampton and the last two sessions were washed out.