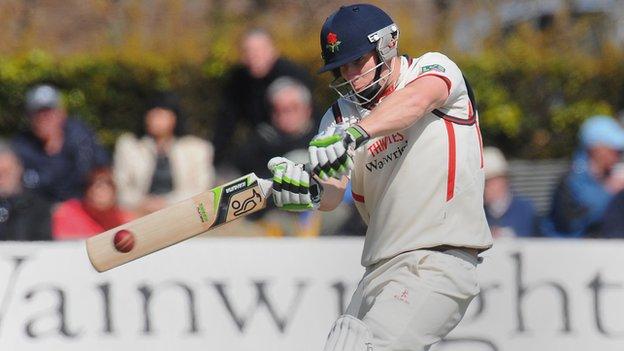 Steven Croft became the second Lancashire batsman to reach three figures as his side dominated a rain-interrupted second day against Surrey.

Surrey had made a bright start to the day to reduce the visitors to 298-6.

However, Croft and Glen Chapple (46) put on 121 for the seventh wicket before heavy rain ended play early.

Ashwell Prince, 32 overnight, could only score a further two runs before he was caught by Zander de Bruyn at deep mid-wicket off Murali Kartik's bowling.

De Bruyn then ran out Tom Smith with a direct hit when the batsman attempted a risky single, before Gareth Cross picked out Zafar Ansari at square leg off a Stuart Meaker bouncer.

But Croft, who was dropped twice on Wednesday evening, claimed the fifth first-class century of his career and second of the season as Lancashire gained four batting points.

Chapple was trapped lbw by Jon Lewis but the rain came midway through the afternoon session to bring an early halt to the action.

"Lancashire will be frustrated that bad weather has intervened with no play possible after 3pm.

"However, Glen Chapple's side find themselves in a strong position after a tremendous innings from Stephen Croft. The partnership of 121 between him and his skipper has put Lancashire in complete control.

"Curiously, on a ground that tends to favour the seamers, the Surrey spinners have made the odd delivery turn. That will encourage the left-arm spin of Simon Kerrigan, who could have a key role in the next two days."