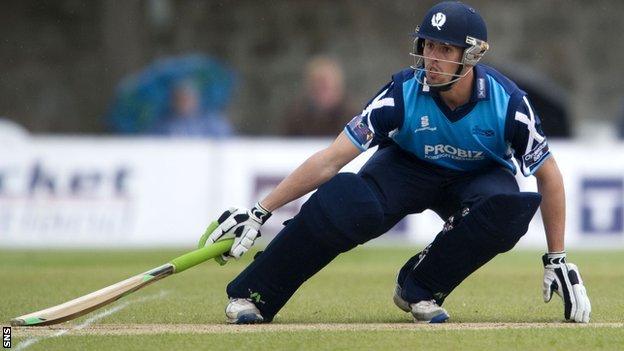 Calum MacLeod hit 99 not out as Scotland beat Canada by four wickets in the ICC World Cricket League Championship match at Ayr.

Only MacLeod, Josh Davey and Gordon Goudie reached double figures for the Scots with the latter two reaching 23 and 17 respectively.

But MacLeod's contribution was enough to secure victory for the hosts.

The match had originally been scheduled to take place in Aberdeen but rain forced a switch to Ayr's Cambusdoon New Ground.

Gunasekera's half-century set the early pace after Scotland had won the toss and elected to bowl.

However, Canada struggled after Siddiqi and Damodar Daesrath (24) were bowled by Majid Haq and Gordon Drummond respectively, with Haq and Goudie taking two wickets each.

MacLeod hit 12 fours as he took control of Scotland's reply.

Scotland's win with 47 balls remaining boosts their hopes of World Cup qualification, with Peter Steindl's side now second in the table, two points behind Ireland.