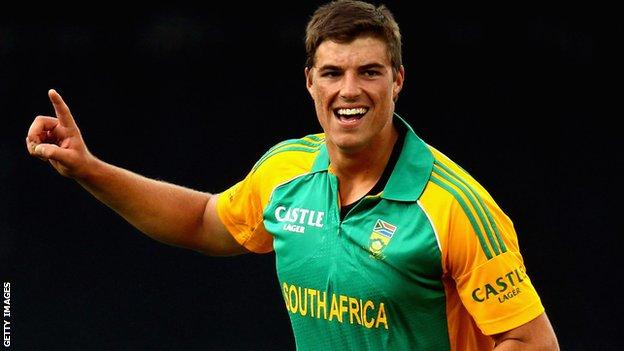 South Africa pace bowler Marchant de Lange has been ruled out of the tour of England after suffering a stress fracture in his back.

De Lange is the second member of the squad to withdraw before the first Test on 19 July, following wicketkeeper Mark Boucher's career-ending eye injury.

The 21-year-old will be replaced by Albie Morkel.

"Marchant has been diagnosed with a lower-back stress fracture and will require at least six weeks' rest and rehabilitation," he added.

Morkel, the 31-year-old older brother of South Africa seamer Morne, now has the chance this summer to add to his solitary Test cap, in which he hit 58 runs and took one wicket on the way to an innings' victory against Australia in Cape Town three years ago.

The tourists, who are warming up for the first Test on July 19 at the Oval by playing Kent, are hoping Morkel's experience of English conditions with Somerset this summer may be a significant asset.

National convenor of selectors Andrew Hudson said: "Albie is the ideal replacement for Marchant, because he comes into the squad with invaluable knowledge and experience of the UK conditions.

"He has a good first-class record, and his ability to swing the ball and to contribute with the bat lower down the order gave us the extra incentive to rope him in."

Meanwhile, South Africa's bowlers prepared for the first Test with England by taking six wickets for 64 runs after tea to dimiss Kent for 210 on the opening day of their three-day match.

Imran Tahir cleaned up the tail to record 4-31 - his best figures for his adoptive country.

Morne Morkel was the other standout bowler of the day as he finished with 3-49. South Africa were 31-1 at the close.

The first Test is followed by further five-day games at Headingley and Lord's.