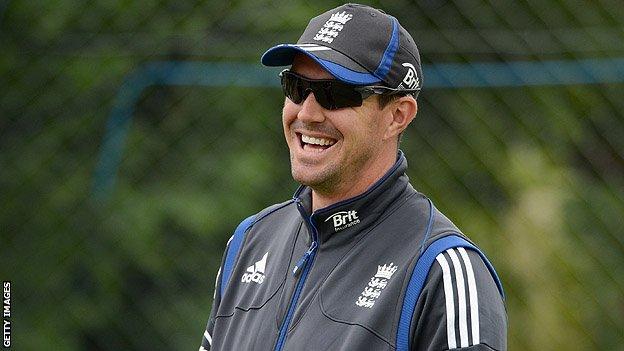 Kevin Pietersen has suggested he could reverse his decision to retire from limited-overs cricket for England.

The 31-year-old Test batsman retired from representing England in the shorter formats of international cricket in May.

"I've said before that, if the schedule was right, I would love to play for another three or four years in all forms of cricket," he said.

"But the schedule is a nightmare. I hope something can be sorted out."

Asked if talks with the England and Wales Cricket Board about his limited overs future had begun, he replied: "I think so."

"This will not come as a surprise to people who are involved in England cricket. Kevin behaves as he bats - he's impetuous and he does jump to decisions. This possible U-turn suggests he rushed into this without thinking it through. The way England played against Australia indicates that he would not walk into the 50-over side and the concern will be that he is thinking purely about the Twenty20 World Cup.

He is going to have to convince the ECB and Andy Flower that he is committed to all forms of the game. That will mean committing himself to the whole of England's manic schedule in 2013. It will be fascinating to see how it pans out but he will have to give those assurances if his return is to be considered."

Pietersen had initially wanted to quit 50-over cricket only and continue with Twenty20, but the terms of ECB central contracts prevent players picking and choosing their formats so he has only played Test matches this summer.

Speaking after he struck an unbeaten 234 from 190 balls for Surrey against reigning County Championship Division One champions Lancashire, the South African-born player reiterated his desire to feature in England's World Twenty20 title defence later this year.

But England must meet an International Cricket Council deadline of 18 July to name their initial 30-man squad for the tournament in Sri Lanka in September.

And if he does return, Pietersen could face an even busier schedule than over the past year.

Following the Test series against South Africa, there are a further five one-day internationals and three Twenty20 matches against the tourists.

England then kick-off their winter tour in India with four Tests before a further five ODIs. And they have a similarly gruelling schedule in New Zealand before the Kiwis arrive in England in May for a series of matches before the Ashes begin in July.

"There comes a time when I know what I need to do to be successful. I've got a young family and I cannot be on the treadmill all day, every day."

Pietersen has missed just one Twenty20 international, against the West Indies, and the 50-over series wins over the West Indies and Australia since making his retirement decision.

In his absence England have been unbeaten with Ian Bell ably filling his place at the top of the order, claiming the man-of-the-series against Australia, while Alex Hales blasted 99 in the Twenty20 win over the West Indies at Trent Bridge.

In that time Pietersen has enjoyed time away with his family, including a brief return to South Africa, and had played just five domestic Twenty20 games for Surrey since the final Test of the West Indies series a month ago.

On Friday, he showed no sign of rustiness on his return to the four-day format.