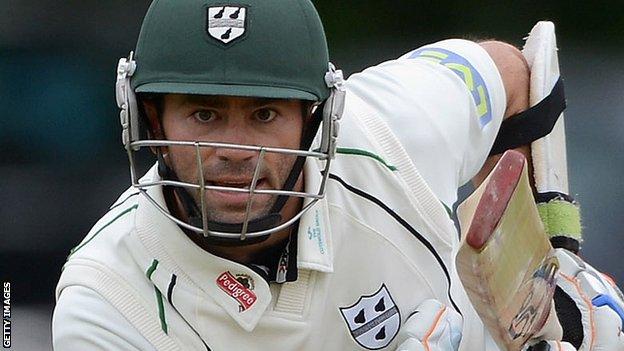 Ben Scott scored only his fourth first-class century in 99 matches to rescue Worcestershire against Lancashire on day one at Old Trafford.

Simon Kerrigan (4-117) and Steven Croft (3-64) reduced the Division One strugglers to 93-6, before the former Middlesex man led the recovery.

Worcestershire, who are next-to-bottom in the table and without a Championship win this season, eased to 40 without loss but lost captain Daryl Mitchell to Kerrigan for 12.

Fellow opener Australian Phillip Hughes made 32 but fell lbw to Croft, as six wickets fell for the addition of only 53 runs.

Scott's 170-ball innings contained 11 fours and he was last man out, caught by Glen Chapple off Kerrigan.

"What a day for Lancashire's Steven Croft. He gets named in the for the World Twenty20. He then takes three wickets and, if that wasn't enough, takes two catches and a run out. Not a bad day's work.

"Croft has been rightly rewarded for his performances in one-day cricket, not just for this season but over the last few.

"Simon Kerrigan claimed four wickets, but Lancashire were grateful to Croft who broke up a seventh-wicket partnership worth 127 by running out Matthew Pardoe."