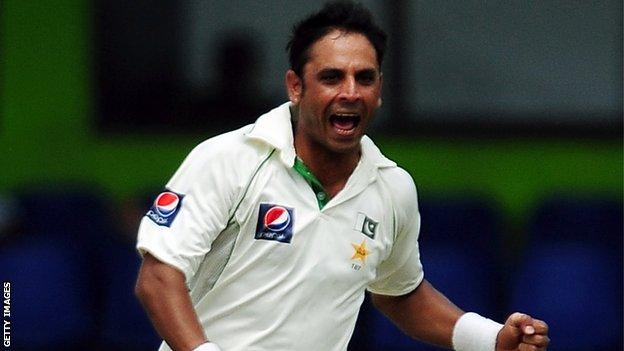 The slow left-armer was expected to make his debut in the County Championship Division One game against Warwickshire starting on Wednesday.

"Abdur has applied for his visa but we are still waiting for the outcome," director of cricket Brian Rose explained to BBC Somerset.

"It looks more troubled the longer it goes on."

Somerset have been dogged by issues with their overseas players this season.

Rehman, 32, was drafted in as a replacement for Vernon Philander, who played five games on a short-term contract before reporting for duty with South Africa.

Failed to secure a visa

Turned down a deal so he could play for West Indies

Signed to replace Gayle, but opted to honour international commitments with South Africa

Philander's compatriots Albie Morkel and Richard Levi have featured in Somerset's T20 campaign have missed games due to international commitments.

The club also attempted to bring in Chris Gayle,Faf Du Plessis, Roelof van der Merwe and Kieron Pollard, but the deals fell through.

Rose added: "I'm on plan K at the moment. I would need a week to ten days to find an alternative.

"We'll wait and see what happens in the next few days, but we'll only wait for a certain time because obviously time is pressing."

The spell with Somerset is set to be Rehman's first foray in English county cricket, and he brings with him a wealth of international experience, having played 17 Tests, 23 one-day games and seven T20 matches for his country.

He was signed as cover for George Dockrell, who is playing for Ireland at the U19s World Cup, and Rehman's absence for the match with Warwickshire means youngster Max Waller will be the only remaining front-line spinner.

But Rose says Waller, who has played only seven county championship games, needs to step up to the challenge.

"It's one of the key points of his development," he explained.

"He has been successful in one-day cricket for us but he does need to develop in the first-class game to earn future contracts.

"I think the next couple of games it could be very important for him. It will cement his confidence and cement his place in the future."