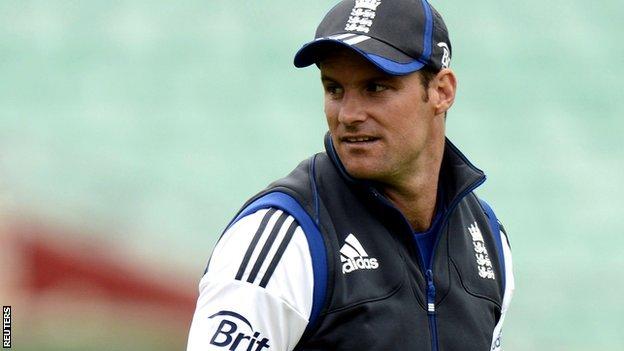 England captain Andrew Strauss says the three Tests against South Africa will be as keenly fought as an Ashes series against Australia.

The first Test at The Oval starts on Thursday, with the recalled Ravi Bopara, 27, set to bat at six.

Strauss said from a player's point of view it is "up there with the Ashes".

The England captain added: "It's the highlight of the summer. It is hard, competitive cricket between two good sides going toe-to-toe."

Strauss confirmed Bopara would make his 13th Test appearance and his first in almost a year.

"He's played really well in the one-dayers and looks very comfortable with himself and his game. He also has the ability to bowl some handy overs for us," said Strauss.

"He's a good guy to have at six for us and I'm sure he'll be really glad to grab this opportunity with both hands and cement that spot."

Alec StewartBBC Test Match Special
It's a really close call, because it's the most evenly matched contest that we've seen for a long time but I'm backing England to win by one and retain their status as the world's number one Test nation

If the Proteas win the series they will leapfrog England to go top of the world Test rankings.

A drawn series would keep Strauss's men at the top but the veteran batsman wants his side to aim for the win and cement their world number one status.

"This is a challenge for us to see where we're at," he said. "The rankings say we're number one. Well, we need to go out there and prove that now."

Kevin Pietersen is part of the Test squad but has been omitted from England's provisional ICC World Twenty20 squad.

Pietersen has announced his retirement from all short-form international cricket but hinted a few days ago he might change his mind.

Strauss, who only captains England in Tests, said: "Both KP and the rest of this team are only interested right at this moment on winning this series."

Paceman Graham Onions has been ruled out with a thigh strain, so the final place in the XI looks to be between the incumbent Tim Bresnan and 6ft 7in fast bowler Steve Finn, who has been in fine form for the England one-day team.

South Africa, like England, also have a renowned pace attack and Strauss confirmed he was expecting a tough time.

"South Africa have a bowling line-up as good as anyone in the world and that's a good challenge for us," he said.

"When you're long in the tooth, as I am, you look forward to those challenges.

"It's not [just] going to be a battle between the opening bowlers and opening batters - everyone has got to put their hand up to be prepared to play tough cricket to win this series."