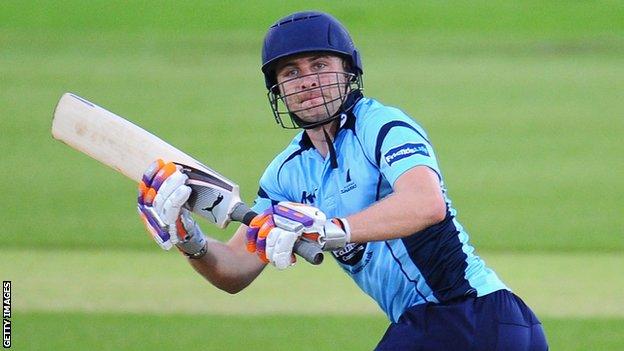 Sussex all-rounder Luke Wright is delighted to have been named in England's 30-man provisional squad for the World Twenty20.

The 27-year-old has not represented his country since June last year.

He told BBC Sussex: "It's been a while that I've been out of the reckoning so it's nice to be noticed again.

"I'd have been disappointed if I wasn't in it after doing well for the last year. There's a lot of good names so it'll be tough getting into the 15."

Wright has played 30 Twenty20 internationals for England but has not appeared since the nine-wicket defeat by Sri Lanka in Bristol over a year ago.

The Grantham-born player missed the second half of the 2011 campaign after undergoing surgery on a knee injury.

With England ranked as the top Twenty20 side in the world by the ICC, Wright is aware he has a battle to regain his place in the national side.

"I got injured and other players take your place," he continued.

"England have done so well over the last year or two and it's a very tough team to break into, which is a good thing for England.

"I'm desperate to get in there but I understand why people are playing there.

"It's up to you to put pressure on them and if they slip up, then hopefully you get a go."

It would be lovely to go out to Sri Lanka and defend the title. It would be a great opportunity

Wright, who was a part of England's title-winning team in 2010, has been in impressive form with the bat in T20 since his return to full fitness.

He hit a century off only 44 balls for the Melbourne Stars in the Australian competition, and has averaged 44.00 in this season's domestic tournament with the Sussex Sharks.

Wright says he will focus on his form with Sussex in a bid to make England's final 15-man squad, which must be decided by 18 August.

"There's plenty more games to put in a few more performances and try and push my name forward even more," he continued.

"First and foremost, it's trying to win a trophy for Sussex.

"As soon as you get too far ahead [of yourself] that's when you start to struggle.

"That's why I've done pretty well over the last year. I've been in my own bubble by going out and trying to enjoy games."