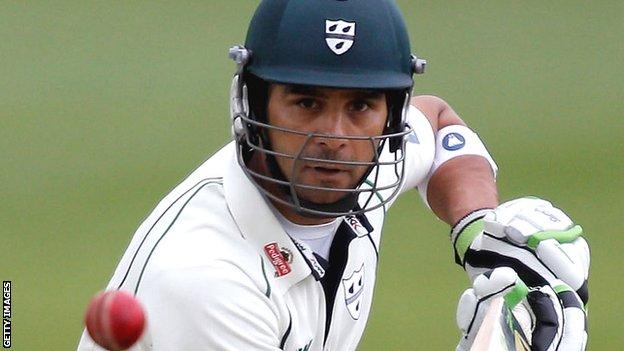 Worcestershire batsman Vikram Solanki will leave New Road at the end of the season to join Surrey.

The 36-year-old has spent 20 years with Worcestershire, including five as captain, scoring almost 27,000 runs in all competitions.

Solanki's contract expires in September and the county have not been in a position to offer him a new deal.

"Surrey have offered me an exciting chance to finish my career at the Kia Oval," he said.

"I'm incredibly grateful to Worcestershire for giving me a chance all those years ago.

"I have many, many fond memories with the club both on and off the pitch with players, staff and supporters alike and the decision to end our long relationship has not been easy."

India-born Solanki made his first-class debut for Worcestershire back in 1995, and went on to win international recognition with England, playing 51 one-day and three Twenty20 internationals.

His move to Surrey will bolster a batting line-up that has been depleted by the retirement of Mark Ramprakash and the death of Tom Maynard.

Director of cricket Chris Adams told BBC London 94.9: "Considering what's happened to the side in recent weeks, to suddenly find ourselves in this position where we are recruiting and rebuilding and the first signing is Vikram Solanki, I'm delighted with that.

"He's a terrific player, somebody I've played against a lot in the back end of my career. He is a very, very dangerous batsman in all forms of the game and he comes with a great career behind him and still with years to go.

"I asked a few of my own players this week about Vikram and also players that he would have played against over time and, to a man, all gave a great endorsement."

"Vikram approached the club a few weeks ago with regards his future, as his contract ends this September, and it was expressed at that time that the county would not be in a position to offer a contract but hoped to be in a position to do so later in the year when the club's financial position is clearer," he said.

"The club fully understood Vikram's wish to have greater certainty about his future and gave permission for him to talk to other counties due to his long standing at the club.

"We understand Vikram has now received and accepted an offer from Surrey and therefore reluctantly Vikram will be leaving the club at the end of the season.

"The club and its supporters thank Vikram for his 20 years of service to the county, and for his elegant batting and successful captaincy."