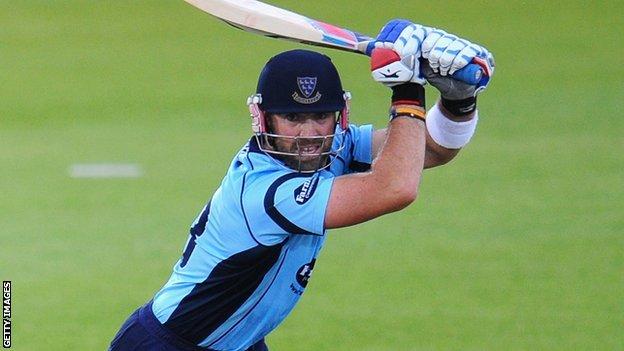 Sussex have wicketkeeper-batsman Matt Prior available for their FL t20 quarter-final against Gloucestershire.

The 30-year-old, who played for England in the First Test against South Africa, averaged 46.75 in his four domestic T20 innings this season.

The Sharks won the South Group stage of the tournament, winning six of their games.

Scott Styris is also included as he continues his recovery from a thumb injury picked up in the group stages.

Prior has scored 187 runs in this year's competition, with 81 of those coming off just 37 balls in Sussex's game against Hampshire earlier this month.

Sharks coach Mark Davis told BBC Sussex: "Matt has been unbelievable and it's hard to believe England don't choose [him] in their T20 side.

"I don't think I've seen anybody play like that," Davis continued.

Matt Prior in FLt20 this year

"The pitch was seaming and Dimitri Mascarenhas is very effective in those conditions. Matt started sweeping him over fine leg and it was extraordinary."

After losing just one game in the tournament this year - and that by the Duckworth/Lewis method to Surrey - Davis is hopeful of securing a berth at next month's finals day in Cardiff.

"We've got a strong side but we've still got to perform," Davis said.

"We've batted really well and bowled well in the top six overs. We've got a method of winning games so long may it last.

"Hopefully we can keep playing with confidence and get to finals day, where anything can happen."