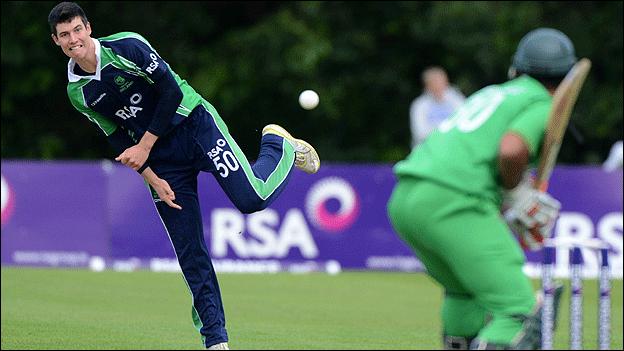 Ireland lost wickets in successive balls during an exciting last over as they fell two runs short of a series-equalling victory over Bangladesh.

The hosts needed 10 off the last over in the Twenty20 contest at Stormont, but off-spinner Mahmudullah dismissed Andrew Poynter and Ed Joyce.

Bangladesh, who had trounced Ireland by 71 overs on Wednesday, won the toss and compiled 146 for six.

The Irish had looked to be in the driving seat until the stumpings of Gary Wilson and Kevin O'Brien in the space of 10 balls evened up the contest.

Ultimately, it was the accuracy of Mahmudullah which won it for the tourists, as he conceded just six singles and took those two wickets off 11 balls in his final two overs.

Being hit for six by Trent Johnston with his final delivery did not matter and Bangladesh took a winning 2-0 lead in the series to sit ninth in the Twenty20 rankings, a place ahead of Ireland.