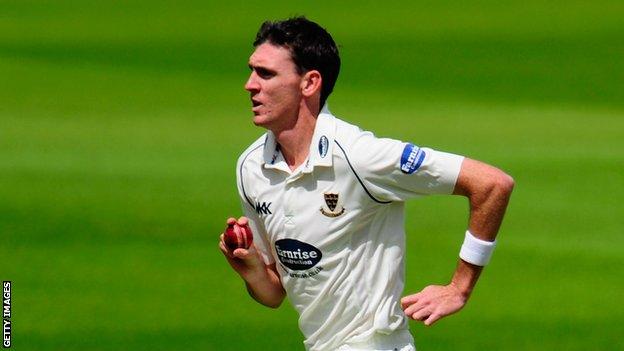 Sussex held their nerve to secure a two-wicket win over Durham in a thrilling County Championship encounter at Arundel.

Resuming on 80-7, Durham were all out for 93, with Sussex seamer Steve Magoffin taking figures of 6-22.

Sussex needed just 94 to secure victory, but lost opener Luke Wells for a duck in the first over and were then reduced to 50-7.

But Magoffin (23 not out) and James Anyon (14 not out) secured the victory.

Sussex record their third win of the season to keep them in the upper half of the table but Durham, still looking for their first four-day win of the campaign, fall even further adrift at the bottom.

The visitors added only 13 to their overnight total as Paul Collingwood failed to add to his 29, falling in the first over to Kirk Wernars, and Magoffin got rid of Callum Thorp and Mitch Claydon.

Thorp (4-28) and Chris Rushworth (3-35) had Sussex in trouble on 50-7, before Magoffin held his nerve to secure victory for the hosts.

"It was too close for comfort and not good for the nerves, but a tense win and I'm really pleased for all the players.

"You just need something to go your way and someone to change momentum, and Magoffin did that.

"I really like Durham and admire them as a team. It is great to beat them but they fought really, really hard."

"The finish was tremendous and obviously a great advert for the game.

"You always want to be on the right side of one of those tight finishes, but it wasn't to be for us.

"You could not ask any more from the team. The belief the team had in being able to try and defend such a small total was fantastic."

"A tremendous advertisement for the County Championship with Sussex just squeezing home.

"Steve Magoffin showed yet again what an astute overseas signing he has been for Sussex, taking nine wickets in the match and conceding a paltry 50 runs in the 34.4 overs he bowled in both innings.

"However, the Australian also shone with the bat. His 23 not out at number nine was a vital contribution, without which Durham may well have recorded their first Championship win of the summer.

"Credit Durham who never gave up, and the wicketkeeping of Phil Mustard, particularly a leg-side catch standing up to Callum Thorp, was a purist's delight.

"Sussex will travel in good heart to Trent Bridge next week, with the teams above them knowing that another side have entered the race for this season's County Championship."