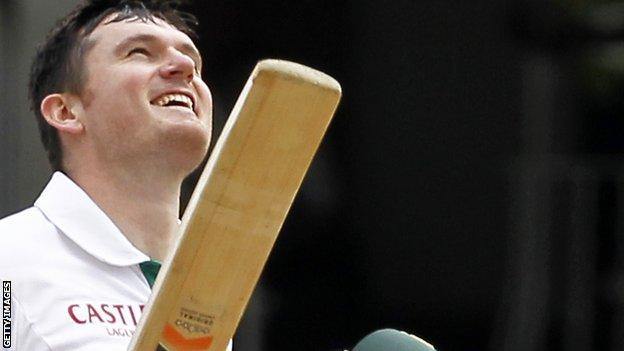 South Africa captain Graeme Smith says scoring a century against England in his 100th Test match was "a dream".

Smith, who will return home before the second Test to attend the birth of his first child, scored 131 to help the Proteas to 403-2 on day three at The Kia Oval, an overnight lead of 18.

"When I got to 100, there were so many emotions coming through, knowing my wife is giving birth in three days' time," said the 31-year-old.

"You can say what you like about Smith - that he's an ugly batsman, he's not aesthetically pleasing. But he's gutsy; he's determined; he's got a strong mind. When the going gets tough, he's the one South Africa look to. I like cricketers like that and I've got tremendous admiration for him."

"It was a dream to achieve that."

He added: "I guess in the next day or two it will sink in. To play 100 Tests is a terrific achievement, then to get a hundred is the cherry on the top and it feels great."

In becoming only the seventh player to mark his 100th Test with a hundred, the left-hander also notched his fifth ton in England.

"I feel comfortable in England," Smith continued. "You get good preparation time to adapt and you spend some good time together as a team.

"It's always a big tour. I enjoy it, it brings the most out of me."

Smith shared a second-wicket stand of 259 with Hashim Amla, who ended the day unbeaten on 183. When Smith fell, Amla was joined by Jacques Kallis, who hit 82 not out.

On a pitch offering little assistance to the bowlers, South Africa have created the opportunity to post a huge total and leave England batting to save the game.

"It's been a difficult wicket to push on and score quickly, but if we set up a good base tomorrow [Sunday], then hopefully we can do that," said Smith.

"But tomorrow's a fresh day and we have to respect our opponents and their ability to bounce back. We do want to push for a victory, that's definitely in our minds."

England have taken only two wickets in the 135 overs they have delivered to the Proteas, but bowling coach David Saker was satisfied with how the home attack performed.

"I wouldn't have said it was bad bowling," said Saker. "It was a flat wicket and our guys toiled away really well.

"We just couldn't get the ball to move laterally, which is one of our big strengths.

"It was tough to watch, but I was pretty proud of the way they kept running in. They did pretty much everything we asked of them."