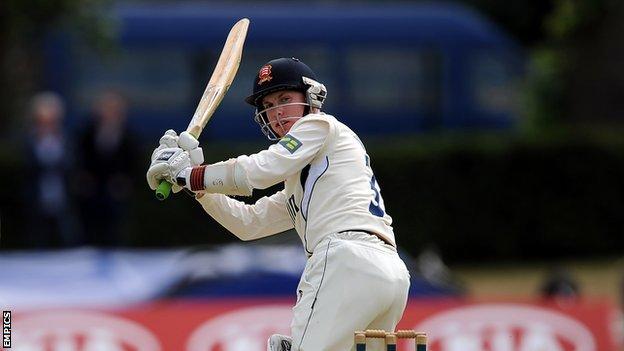 Essex looked like they would fall well short of their target after being reduced to 222-7.

Adam Wheater (98) led a valiant tail-end effort, including an eighth-wicket stand of 68 with Harbhajan Singh (40).

But Wheater fell to the bowling of James Tomlinson (5-86) with just three runs needed for victory.

Hampshire move up to second in the table after their third win of the season, and now lie 22 points behind leaders Derbyshire.

"It was a very good declaration from Hampshire but we feel disappointed we didn't chase those runs down.

"It was a wonderful innings from Adam [Wheater] and he nearly got us over the line from a position after tea where we were nearly dead. Harbhajan played really well and it was a tremendous partnership between those two.

"It was a good pitch throughout the game and we feel as a batting unit we should have got those runs. We needed one of our top four or five to get a hundred. As a group, the players should be disappointed.

"We'll need to win four or five of our last games to get second place now."

"Both sides came to what we thought was near enough a right figure [for a run chase] and so it proved.

"It's fortuntate really that we've come out on top.

"At the end we did start to fear the worst. We had to work really hard to get those 10 and they had to work hard for their runs."

"Very rarely do two captains agree a run chase that starts on the penultimate day.

"In fact at a rate of 2.5 runs an over, the run chase factor for Essex was never in the equation.

"It was simple - bat long and Essex would win, but it gave Hampshire enough time to bowl them out properly.

"The last day ebbed and flowed, but Adam Wheater, having practically won the game for Essex, then went for glory and holed out at deep mid on with three runs needed. Hampshire were thankful that he did."