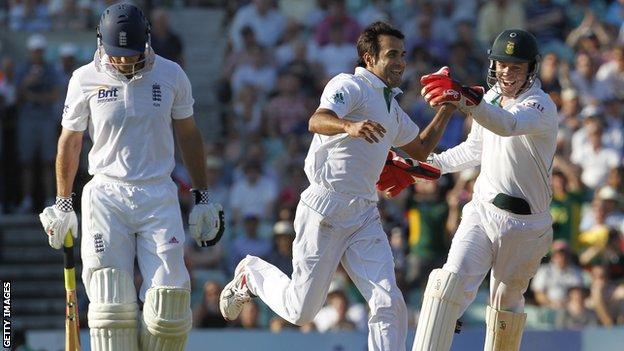 A defiant Graham Gooch insists England can still draw the first Test with South Africa at The Kia Oval.

Hashim Amla became the first South African to score a Test triple century as the tourists reached 637-2 declared - a lead of 252.

The hosts reached 102-4 by the close on day four, but still need a further 150 to avoid an innings defeat.

"If we can have a good partnership and take it up to lunch, there's a chance," claimed the England batting coach.

"We're not giving up, that is for sure. England have put on big partnerships before to save games down the years."

"Quite frankly, it was murder in the sun. South Africa bowled and batted better than England - everything was better. England certainly haven't looked like the number one side in the world in this Test. England's batting was awful."

England lost their top four cheaply before the close with Ian Bell and Ravi Bopara remaining at the crease ahead of what will have to be a big final day if the hosts are to avoid going 1-0 down in the three-Test series.

Gooch added: "When you've played quite a bit of Test cricket you accept not every game is going to happen for you - and at the moment South Africa are in a dominant position.

"That's stating the obvious. But the game's not over yet - you have to believe you can still get out of this game with a draw.

"If England achieve that it will be a great performance."

Meanwhile, Amla praised the help he received from team-mate Jacques Kallis (who scored 182 not out himself) during his record-breaking triple century as the tourists dominated on a good batting wicket.

"This innings is something I'll remember, but I've still got a long way to go in the development of my game," insisted Amla after his unbeaten 311.

"Having Jacques there was a massive help, he kept the scoreboard ticking which meant I could go about my business."