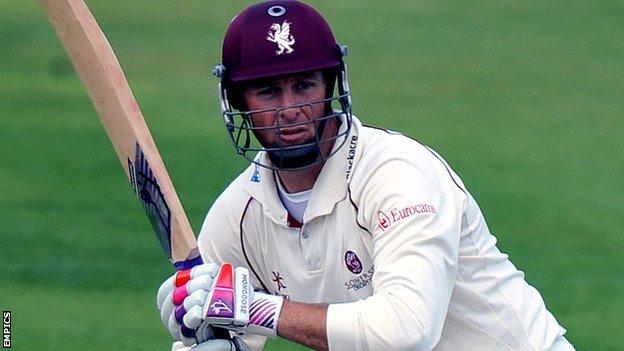 Somerset captain Marcus Trescothick says he is feeling positive after returning to the field following a three-month absence through injury.

The 36-year-old opener required ankle surgery after being taken off during the County Championship game against Nottinghamshire in April.

But he made his comeback in the CB40 on Sunday and managed 15 runs in his side's eight-wicket win over Durham.

"It's nice to be back out there. It's been a long time sat on the sidelines just watching.

"When I came off at half-time I was a little bit tired. It was a really tough test for the ankle and it got a little bit stiff.

"It's now a case of doing more and more. The more I do on it, the better and stronger it will get."

Although the focus at the start of Sunday's match was on Trescothick's return, it was his opening partner Craig Kieswetter who stole the show.

Having scored 152 against Warwickshire in their one-wicket County Championship victory on Saturday, the England wicketkeeper hit 103 in 61 balls, including six sixes and nine fours, to help his side move off the bottom of the CB40 standings.

The Taunton outfit face Essex in the T20 quarter-finals on Tuesday and Trescothick says the results over the weekend have given the side a renewed confidence.

"It was a great win this week and such a vital time to pick up a great result," he added.

"It threw us right back in to the mix at the top of the [Division One] table.

"We've had a couple of good days and we want to be consistent in our form. Every day we need to come in and show we're bang on the money."