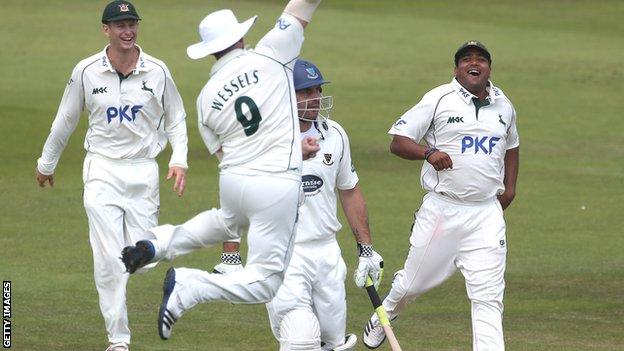 Nottinghamshire finished day one of their Championship match with Sussex in a strong position at Trent Bridge.

It could have been worse for the visitors as top scorer Luke Wells (54) was dropped in the slips by Alex Hales on four and 18.

After captain Michael Yardy won the toss, Sussex made a steady start but lost their openers in successive overs. Ed Joyce was leg before to Adams, while Chris Nash was caught behind by Chris Read off Phillips.

Wickets continued to fall and Yardy was brilliantly run out by Wessels without facing a ball.

Notts were slightly held up in the afternoon by Wells and Ben Brown (37), who put on 41 for the sixth wicket.

But the three-wicket burst from Phillips after tea took him to 16 Championship wickets this season, as Sussex were all out 29 shy of a battling bonus point.

Notts in reply lost Hales lbw to Amjad Khan for eight, but Wessels and Lumb have so far put on 55 for the second wicket to put the hosts in control.

"Notts showed great character to bounce back from the disappointment of their T20 loss in midweek to register one of their strongest Championship performances for some time.

"The pace bowling quartet were exemplary, not offering anything to hit all innings.

"Riki Wessels hurt Sussex with 199 at Hove and is nicely primed to go big against them on day two."