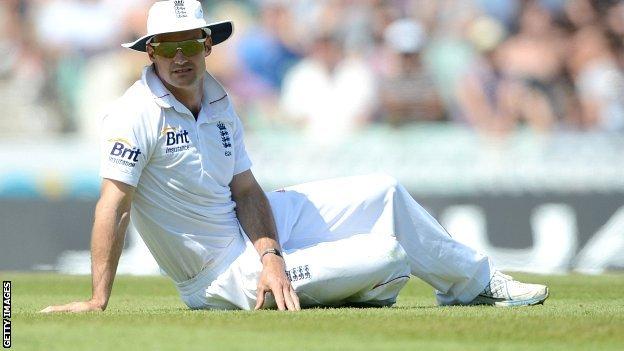 Captain Andrew Strauss says England can draw on recent success to recover from their innings defeat by South Africa.

But their position is under threat from South Africa, who outplayed them in the first Test at The Kia Oval.

"Our attack has taken 20 wickets in almost every game during the last two years and one game shouldn't dent their confidence too much," said Strauss.

"We need to draw on our reserves of confidence.

"England have been hammered - and they just don't get hammered at home. The Test match arena has been a fortress for a while for England on their own turf.

"You're allowed one iffy performance - it's a performance we haven't seen from England for a long, long time and they certainly have the character to bounce back.

"They've got no option but to come out, play positive cricket and try to win the last two games."

"The batsmen made mistakes that we need to be sharper on, but I have every confidence that we can come back stronger.

"We have done it before and we'll do it again."

The result was England's first innings defeat on home soil since the fourth Test loss to Australia at Headingley in 2009.

England were well-placed after the opening day, with Alastair Cook's century helping them to 267-3.

However, they collapsed to 385 all out on the second day and saw the tourists pile on 637-2, with Hashim Amla becoming the first South African to score a Test triple-century.

And England's misery was complete when they were bowled out just short of tea on the final day, with only Ian Bell and wicketkeeper Matt Prior offering any sort of resistance.

"We were soundly beaten," admitted Strauss. "We had the better of day one, but the next four days belonged to South Africa.

"They played outstandingly well but we do have regrets - the way we played on the second morning, to allow them back into the game.

"Losing four wickets on the fourth evening was another body blow. It's important we regroup, learn our lessons and bounce back."

It was a perfect 100th Test for South African captain Graeme Smith, who set the tone for South Africa's dominance with a commanding century before Amla and Jacques Kallis took over.

"You must sell your wicket dear when you are trying to save a Test. England need to be more switched on at Headingley because, ultimately, their success or failure will come down to the application of their batsmen."

He will now return to South Africa for the birth of his first child, before returning for the second Test at Headingley, starting on 2 August.

"It feels amazing, it was a terrific win," said Smith. "We had to work hard - there wasn't much in the pitch so to get 20 wickets in the match is an excellent effort by our bowlers.

"It was also an incredible experience to be a part of Hashim's 300. It was a unique experience and I am very proud that somebody from our team achieved something like that.

"I played against him as a schoolboy, and he was always mentally very strong and destined for the very top."

Amla won the match-of-the-match award for his unbeaten 311, and he was delighted to contribute to the convincing victory.

"It feels great to have a big victory under our belts from the first Test," he said.

"There were nerves out there, but that is part of getting a big score and fortunately I came out on top."