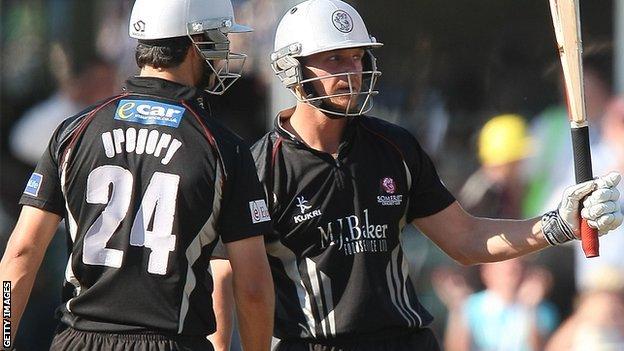 Somerset, who have lost in the T20 final in each of the last three years, claimed a 27-run victory at Taunton.

Essex's Ravi Bopara was out without scoring and the visitors could only reach 148, despite 47 from Ryan ten Doeschate and 28 from Alastair Cook.

Somerset had made a poor start, with Craig Kieswetter dismissed from the first ball of the match.

Reece Topley, 18, claimed the wickets of Marcus Trescothick, Richard Levi and Buttler to leave Somerset in trouble on 91-4 but Hildreth's innings, which included ten fours, changed the game.

Essex were quickly reduced to 9-2 in reply after the dismissals of opener Mark Pettini and England batsman Bopara.

Cook scored 28 off 27 balls, James Foster blasted 26 off 16 and ten Doeschate's 47 came off 23 deliveries but it was not enough for victory.

Somerset's Lewis Gregory (4-39) took the wickets of Graham Napier, Tim Phillips, David Masters and Ten Doeschate as Essex were bowled out in the 19th over.

"It almost feels like a habit going back to finals day.

"It's wonderful for the club that we've managed to get back there - it's four times in a row now.

"We've got a really good team here. We seem to be peaking at the right time and seem confident in this format.

"If we keep remembering the things we do well the hopefull we'll go one step further."

"Once again our batting order hasn't fired on the big occasion and that's really disappointing because from one to eight, we look very strong.

"We gave it a good go towards the end - I thought Ryan (ten Doeschate) played well and showed glimpses of his old self and Fozzie (James Foster) as well - but we were never going to get those runs once we were three down for 20.

"(Somerset's) 170 odd, we were quite pleased with that. We thought it was a par score because it was a good pitch, small boundary on one side and a fast outfield.

"It just needed one of our top order to get 60 or 70 and a couple of people to chip in and we'd have got over the line."