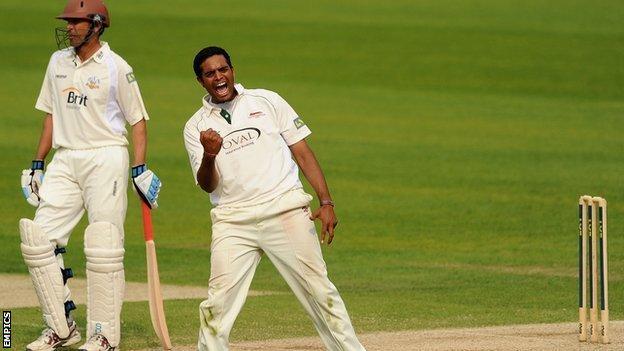 Leicestershire all-rounder Jigar Naik has his sights set on a return to action next week after almost three months out with an ankle injury.

The off-spinner is back in the nets after damaging ligaments on 6 May.

Naik is aiming to feature in Leicestershire's Championship match with Essex on 1 August.

The off-spinner has revealed that Peter Such, the new England and Wales Cricket Board spin coach, has played a supporting role in his rehabilitation.

It was during Leicestershire's CB40 loss to Lancashire that Naik sustained his injury and he admits to having endured three months of frustration.

"I've done a lot of visualisation and all these mental techniques you get these days and that's helped me thorough and I'm coming back stronger," he told BBC Radio Leicester.

"It's been very, very frustrating indeed. I didn't get selected [at the start of the season] and the first game I played I snapped my ankle.

"It's been hard watching the guys play and to a certain extent it's been frustrating to think that I can't do anything to help the team - just sit there and do nothing.

"It's been difficult but the sun's out now and hopefully I'll get back soon. The wickets are getting drier, so I'm very eager to get out there."

Former England international Such has been checking on Naik's progress over the phone and the 27-year-old says contact from the national set-up has encouraged him.

"Peter's very keen to get down here and try and get me going again," said Naik.

"He might come over for a couple of days next week. They have been fantastic about it and helped me though my recovery.

"It's very encouraging. Peter's called me occasionally to see what's going on and telling me not to rush back and to make sure I'm 100% before I come back."