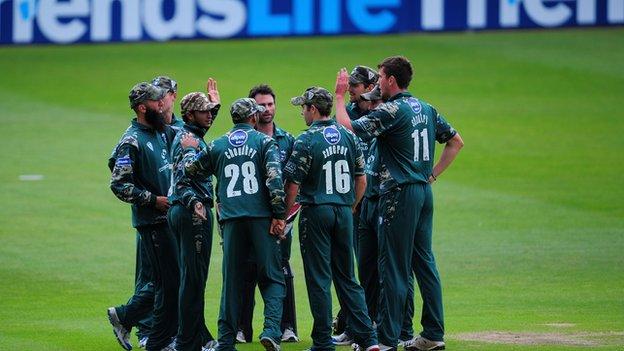 Worcestershire coach Steve Rhodes insists that his team have no need of an overseas player for Wednesday's FL t20 quarter-final against Yorkshire.

Having reached the last eight for only the third time in 10 years of Twenty20 cricket, Rhodes now backs his own men to reach finals day for the first time.

I'm just hoping the crowd gets on their backs. They're vociferous and opinionated at Headingley and I'm sure if Yorkshire struggle a bit they'll get on to them

"But our guys got us there and deserve a chance to get us to finals day."

Whatever happens, there will be a new semi-finalist at Cardiff on 25 August, as neither Worcestershire nor Yorkshire have made it to finals day before.

And, having got this far without either of their two planned Twenty20 signings (Saeed Ajmal, then his replacement Sohaul Tanvir), proud Yorkshireman Rhodes knows just how much pressure there will be on the Tykes.

"They're favourites," admitted Bradford-born Rhodes, 48, who first moved to New Road from his home county in 1985. "And I don't mind that.

"In fact, I'm trying to rev up them as favourites because I think the pressure on them is massive.

"I'm just hoping the crowd gets on their backs. They're a vociferous and opinionated crowd at Headingley and I'm sure if Yorkshire struggle a bit they'll get on to them.

"But my lads are all ready and raring to go. Hopefully we'll be able to see the back door is open and take that opportunity to make it through.

"We can't overcook ourselves or we'll end up trying too hard as we can easily then not turn up at the races.

"I'm trying to get our lads to relax a little bit and enjoy it as it'll be a big crowd.

"If we stick to our game plans then we'll go close and the closer we get the more pressure there will be on Yorkshire."