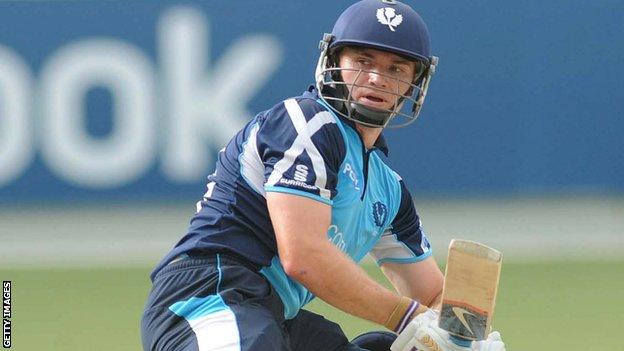 Richie Berrington became only the seventh batsman to make a Twenty20 international century as Scotland beat Bangladesh by 34 runs.

It was Scotland's first competitive win over a full member nation.

The 25-year-old opener hit 10 fours and five sixes as he reached 100 in 56 balls, with the Scots posting a total of 162 for seven in the Netherlands.

Josh Davey and Majid Haq each took three wickets as Bangladesh were all out for 128 after 18 overs.

The Scots had lost their last five Clydesdale Bank 40 matches, but opener Berrington made exactly 100 to almost single-handedly set a total in response to which Bangladesh, ranked fourth in the T20 world rankings, never seriously theatened.

With the scheduled one-day international against England later this month called off, this was Scotland's only match against Test-level opposition this summer and they were particularly grateful for Berrington.

Calum MacLeod made the next highest score after the South African-born Berrington with 19 after their side had opted to bat first.

Mashrafe Mortaza took two for 22 and was easily the Tigers' best bowler, with Abul Hasan coming in for some heavy punishment.

He conceded 32 runs from his three overs, which included three consecutive fours off Berrington in the 13th over.

Bangladesh, who recorded a 3-0 T20 series victory over Ireland earlier this month, lost wickets at regular intervals to undermine their chase in the Hague.

Opener Tamim Iqbal made a breezy 25 off 19 balls at the top of the order and Shakib Al Hasan top-scored with 31.

However, their hopes vanished when he was seventh man out and Scotland duly closed out a convincing win, with Bangladesh all out in the 18th over.