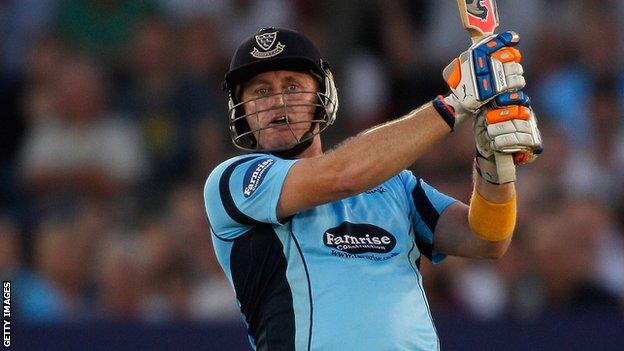 The Sussex man hit an unbeaten 100 off just 37 balls in the quarter-final against Gloucestershire on Tuesday.

He told BBC Sussex: "As a player, you want to perform in big games and knock-out games. Any time you get a hundred is always pretty special.

"In a pressure game, under a bit of heat, it's up there. It was just nice to get the boys over the line."

The 37-year-old added: "The coach [Mark Robinson] talked about someone in the group being man of the match because that would mean that we have won. It was nice to be me."

Sussex, who have lost just one game in this year's tournament, have secured a place in the semi-finals for the first time since winning the trophy in 2009.

"These are the reasons you play the game - to win trophies and titles," the New Zealander continued.

"The way we've played in this tournament, we've been thoroughly deserving to go through to the last four.

"We've put ourselves in with a chance to win a trophy and that's what we want to do as a club."

Sussex had made a disastrous start to their innings, being reduced to 3-2 within seven balls after losing openers Luke Wright and Chris Nash.

However 60 runs off 38 balls by England wicketkeeper Matt Prior, coupled with 55 from Murray Goodwin and Styris' heroics helped Sussex to 230-4 - the highest score in this year's tournament.

Sussex cricket manager Mark Robinson was full of praise for Styris and his middle-order batsmen.

"It was brilliant hitting from Scott," he told BBC Sussex.

"He was doing some practise at Arundel on a really soft part of the outfield, launching soft balls.

"We were a bit incredulous then but he's put it into practise. It was some great, clean striking of a cricket ball.

"Matt counter-attacked and Muzz played at quite a good tempo.

"It was only at the end that he slowed down to try and give Scott the strike. They were important innings to get us on the front foot and Scott finished it off at the end."

Sussex are close to completing the paperwork on a deal for Styris to return for finals day in Cardiff at the end of next month.

"I've been away for four months now with the IPL as well, so it'll be nice to get back to New Zealand even though it is the middle of winter.

"As an overseas player it's always a little nervy coming to a new county.

"You want to show everybody they've made a wise choice in signing you."