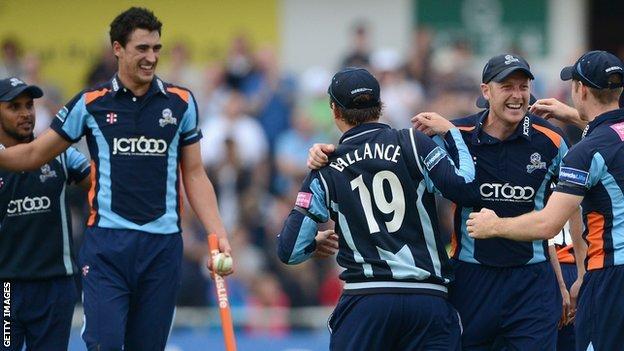 Gale's side beat Worcestershire by 29 runs at Headingley to reach the showpiece in Cardiff.

"It's fantastic. It's great to get the monkey off our backs," he told BBC Radio Leeds.

"Every interview I do about T20 ends up being about us not reaching finals day before so now that we are there we want to go and win it."

Yorkshire will face Sussex in their semi-final on Saturday, 25 August.

Yorkshire's progress to finals day means that Worcestershire and Derbyshire are now the only counties not to have reached the final four of the competition.

They are likely to be without Australian bowler Mitchell Starc, whose contract with the county expires before finals day.

Gale is not hopeful about being able to retain the Test bowler's services.

"We're going to beg Cricket Australia as much as we can but I can't see him coming back for it," he added.

Despite the delight at reaching a maiden finals day, Gale says the team's focus is still on winning promotion from Division Two of the County Championship.

After a weather-affected campaign the Headingley side are currently third in the table, three points behind Hampshire with six games to go.

"Our main target at the start of the season was to get promoted and nothing has changed," he concluded.

"We've played some good T20 cricket and we can take the confidence from this win in to the County Championship."