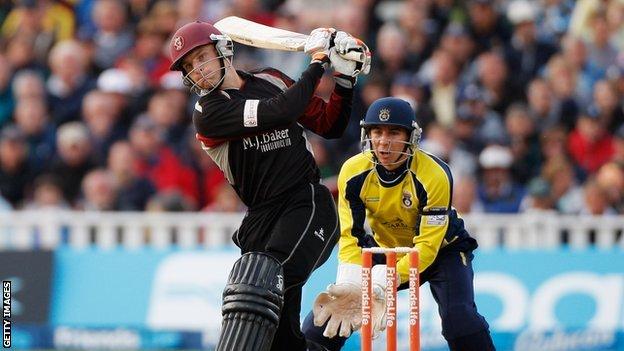 Hampshire and Somerset will meet on finals day for the third successive year after being paired together in the FL t20 semi-final draw.

Somerset won last year's semi following a one-over eliminator after Hampshire beat them in the 2010 final by virtue of losing fewer wickets.

Sussex will take on Yorkshire in the other last-four clash.

Finals day is this year being held at Glamorgan's Swalec Stadium on Saturday, 25 August.

Yorkshire booked their place at finals day for the first time on Wednesday with a 29-run win over Worcestershire at Headingley.

They will meet a Sussex side who beat Gloucestershire in their quarter-final the previous night courtesy of New Zealand all-rounder Scott Styris hitting the joint-third fastest century in T20 history.

Somerset, who have lost the last three finals in the domestic Twenty20 competition, reached finals day again with a 27-run win over Essex on Tuesday.

Hampshire were the last side to secure a place in Cardiff with a dramatic four-wicket victory over Nottinghamshire at Trent Bridge.