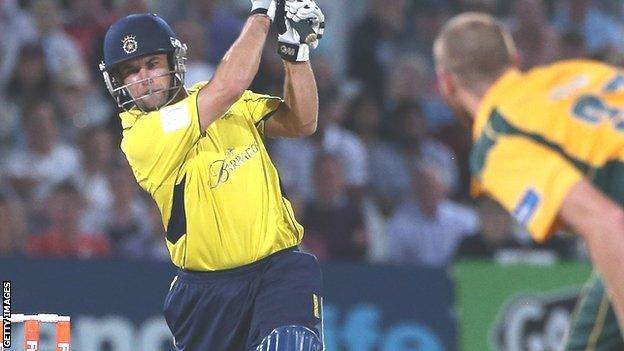 Hampshire batsman Neil McKenzie admitted relief and delight after firing the county into the FL t20 finals day for a third successive year.

McKenzie struck 79 off 49 balls against Nottinghamshire to seal victory.

His previous best in this year's T20 tournament was 20 not out against Surrey in June while the Australian had only struck 47 runs in six innings.

"For me it's nice to contribute, this year I've been a little frustrated," McKenzie told BBC Radio Solent.

The 36-year-old hit three boundaries in the last over as Hampshire won off the final ball and they will now play Somerset in a repeat of last year's semi. Hants also played Somerset in the 2010 final.

"I haven't done too much for the team to be honest and I don't think I've contributed with the bat to get them this far.

"There is a lot of faith in me and finally I might have earned a pay cheque in this last game."

McKenzie says Hants can now look forward to 25 August but admits they face a tough task in making the final.

"It's such a great event and I'm really looking forward to it," he said.

"We've got a lot of work to do before then as all the sides that have gone through are quality."