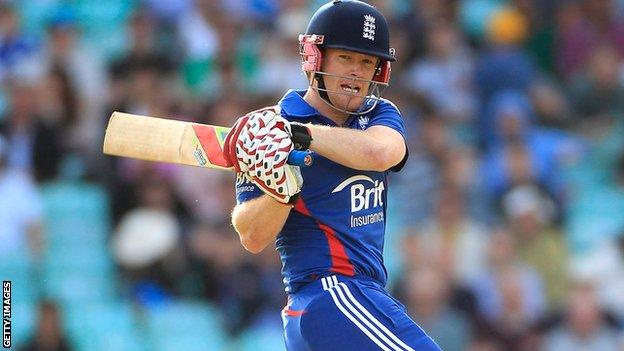 Eoin Morgan will captain the England Lions team in two four-day matches against Australia A next month.

Fellow batsman Jonny Bairstow, left out of the England Test team for the first match of the South Africa series, is also named in a 13-man squad.

National selector Geoff Miller said: "It's an opportunity for our players to show they are capable of representing England at Test level in the future."

The matches are at Old Trafford on 7 August and at Edgbaston on 14 August.

Dublin-born left-hander Morgan, 25, is a key component in England's limited-overs side but has yet to establish himself at Test level, with an average of 30.43 from 16 matches, and has not played a Test since England's 3-0 defeat against Pakistan in the United Arab Emirates earlier this year.

Bairstow made his Test debut against the West Indies in May following an injury to Ravi Bopara, but the 22-year-old was unable to retain his place after only 38 runs in four innings, and a perceived fallibility against short-pitched fast bowling.

Bopara returned to the England Test team against South Africa at The Oval, but made 0 and 22 in an innings and 12-run defeat.

Another one-day squad regular looking to enhance his Test claims will be all-rounder Samit Patel, who played in both Tests in the drawn series in Sri Lanka in March and April, scoring 40 runs in three innings and taking three wickets.

Miller said of the opposition: "We expect Australia A to provide tough opposition and look forward to seeing how some of our most talented players outside the Test squad perform in these two matches."