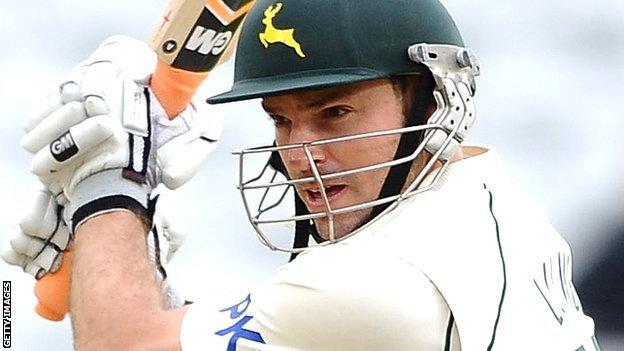 Michael Lumb's century was followed by a James Taylor ton as Nottinghamshire took control against Sussex.

After Riki Wessels and Samit Patel both made 43, Lumb (171) smashed 29 boundaries, including two sixes, in his near six-hour stay at the crease.

Taylor (106 not out) then complied his first ton as a Notts player, with Adam Voges contributing 32 not out, as they reached maximum batting bonus points.

It was a day of toil for Sussex's bowlers who took just three wickets across the three sessions.

Patel passed 6,000 first-class runs before becoming Chris Nash's only wicket of the day.

Taylor and Lumb then put on 188 in in 50 overs for the fourth wicket, including an unbroken 125 between lunch and tea.

Voges then joined Taylor and the pair added an unbeten 71 for the fifth wicket to take Notts to the close well on top.

"Great reward for Mick Newell as he saw two of his winter signings combine to take this game away from Sussex.

"Michael Lumb's 171 was his third Championship century of the summer and, although James Taylor had reached three figures in a University match, a Lions match and a CB40 game, he'll be pleased to at last get his first Division One ton for Notts.

"The pair added 188 together, a county-record fourth-wicket stand against Sussex."