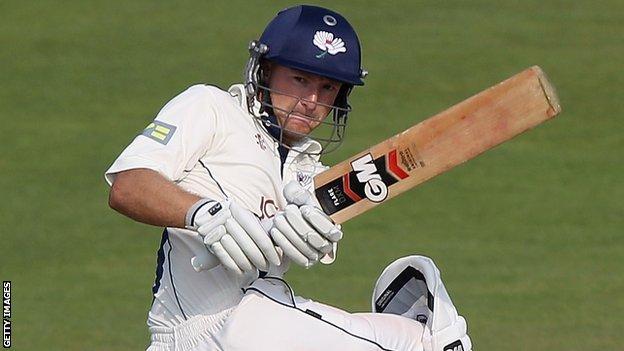 Adam Lyth hit the first double century of his career to put Yorkshire in a strong position against Leicestershire.

Opener Lyth, 159 not out overnight, carried his bat to remain unbeaten on 248, the highest score from any player in this season's County Championship.

Claude Henderson took 4-126 for Leicestershire, who ended day three on 57-2 with Greg Smith making 26 and Michael Thornely dismissed for 17.

Yorkshire, third in Division Two at the start of the match, boosted their promotion hopes as they claimed maximum batting points as they reached the 400-mark with only three balls to spare in the 110th over.

Lyth, the first Yorkshire player to carry his bat since Joe Sayers in 2007, was helped by Steven Patterson's 28 and Azeem Rafiq's 23 as the visitors pushed for the victory.

Leicestershire need to score another 109 runs to avoid an innings defeat and only have eight second-innings wickets remaining after Smith was out lbw to Anthony McGrath and Thornely was bowled by Harmison.