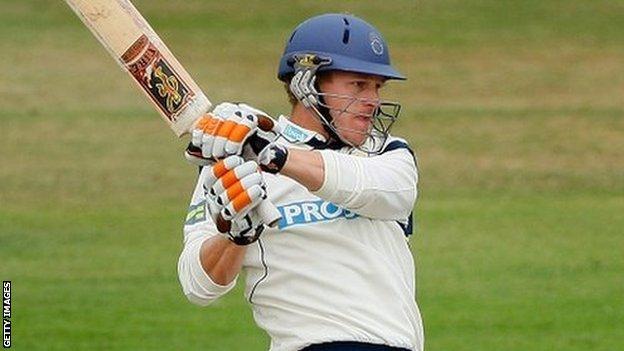 Hampshire skipper Jimmy Adams batted throughout much of the day to help his side escape defeat against Division Two promotion rivals Kent at Southampton.

Adams hit 85 not out, sharing an unbroken 10th-wicket stand of 42 with last man Danny Briggs (20 not out), who helped him see out the final 20 overs.

But the obdurate Adams helped to see his side to safety on 186-9.

Sean Ervine (31) and Liam Dawson (28) were the only two other Hampshire batsmen to reach double figures.

The hosts, needing 175 to make Kent bat a second time, looked to be facing defeat at 144-9, but Briggs helped Adams hold out against a ring of close fielders, being given the benefit of some incerasingly desperate LBW appeals.

Kent, who remain fourth, had to be satisfied with 10 points from the draw.

Hampshire, who are now just two points ahead of Kent in third, escaped with seven, only the weather, which washed out 62 overs on day three, saving them from a heavy loss.