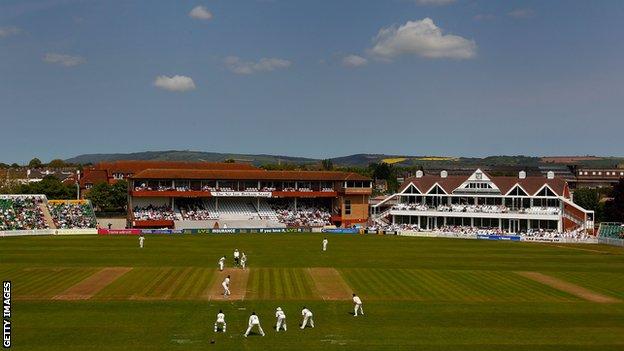 Somerset are struggling for players for their trip to Lancashire after a number of recent injuries in the squad.

Craig Meschede damaged finger in the win over Glamorgan with his replacement, Alex Barrow, later suffering a concussion whilst fielding.

"Craig's finger will take three to four weeks, he's had a tendon that has come off," Brian Rose told BBC Somerset.

"With Alex, with concussion injuries you're going to have to take some time off I'm afraid."

The director of cricket added: "If you get hit again it's quite dangerous, so we'll be taking care of him.

"We've been down to 11 blokes before this season, two or three times. It was interesting to see the way our guys were compensating for that and reacting very well to the situation."

Rose also said he is hopeful that Abdur Rehman's visa issues will be sorted out this week after the spinner's arrival was delayed.

The Pakistan bowler agreed a deal at the start of July but he becomes the latest overseas player Somerset have had problems with this season.

"We haven't given up but we're obviously getting to a position where it's a bit frustrating that he hasn't got a visa," he added.

"I think another couple of days we'll have a look at it and see what happens. If he misses the Liverpool game then we'll have a seriously look at what the scene is."