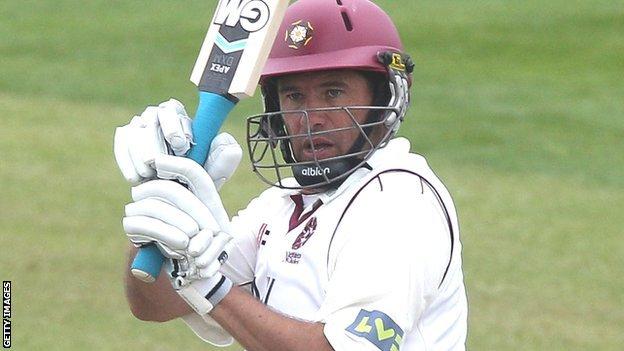 Northants captain Andrew Hall will try to feature in all six of his side's remaining County Championship matches as they target promotion.

The 37-year-old has had an injury-disrupted season and has decided to appear in the four-day competition instead of the remaining CB40 fixtures.

"I might play the odd one-day game but I will prioritise the six Championship matches," Hall told BBC Northampton.

"Hopefully we'll do what Surrey did in 2011 and have a really good run-in.

He added: "The match against Yorkshire is a big one for us. We still have to play the teams above us so those are vital games."

Northants lie fifth in Division Two of the Championship, 27 points behind second-placed Yorkshire with a game in hand, while Northants' one-day side are fifth in the CB40.

Lee Daggett is expected to return to the starting 11 for the visit of Yorkshire, having not played in the County Championship since early June, although Jack Brooks remains sidelined.

"The specialist has said Jack should have another couple of weeks out and we'll take it from there," said Hall.

"Hopefully, if he rests up and gets strong again, we'll see him for a couple of games at the back end of the season."

Meanwhile, Hall hopes batsman David Sales stays with the county, despite his name being circulated to other clubs.

"I feel he's still vitally important," added Hall. "He's got a lot more to offer - and not just on the field.

"He's been with the club for a long time and there are young batters that look up to him."