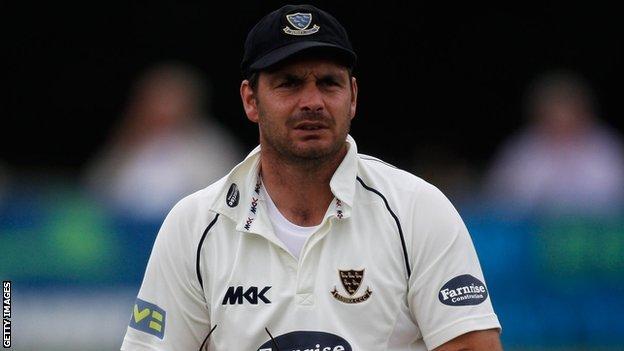 Michael Yardy has stepped down as Sussex captain in County Championship and CB40 cricket, with batsman Ed Joyce taking over.

Yardy will continue to lead the side at finals day of the FL t20 next month.

The 31-year-old took over as captain at Hove in 2009 and was part of the England team that won the ICC World Twenty20 the following year.

He had two spells out of the game in 2011 after returning from the World Cup early after suffering from depression.

Sussex won the Pro40 League and the Twenty20 title under Yardy's captaincy in 2009. The county were also relegated from Division One of the County Championship that season, but bounced back at the first attempt by winning promotion in 2010.

Yardy said: "I have decided to step down as captain in order to concentrate on my own game. There are many things I still wish to achieve as a player which will also hopefully help contribute to the team winning more silverware.

"I would like to say a massive thank you to everyone for all the effort they have put in over my time as captain and I look forward to leading the team at T20 finals day."

Cricket manager Mark Robinson added: "Michael has been an incredibly dedicated captain who has worked tirelessly and selfishly for the good of the club.

"I know he is still incredibly ambitious both for the club and himself and we wish him all the best in fulfilling those goals.

"Ed Joyce will now take over the captaincy duties until the end of the season with the same responsibilities as Michael had including the final say on selection."

We've got to stay an honest and humble team. If we keep those credentials it will serve us well

Joyce will take charge for the first time in the four-day match against Worcestershire at Hove, starting on Wednesday.

Meanwhile, Robinson says his side must show spirit in order to finish the season strongly after salvaging a draw against championship leaders Nottinghamshire.

"When we've got a scent of victory we're outstanding but in some of the others we've folded," Robinson, whose side sit fourth in the table, told BBC Sussex.

"We didn't play as well as we'd have liked to in the first innings but there was a lot of determination to put that right."

Sussex still retain a slim chance of winning the County Championship, lying 28 points off top spot with five games remaining, and could still take the CB40 as well as the FL t20 titles.

"We've been consistent in the one-day game but in four-day we flatter a little bit," Robinson continued.

"We've got to stay an honest and humble team. If we keep those credentials it will serve us well."