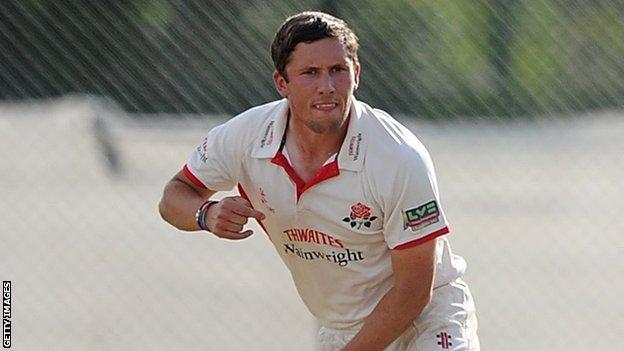 Relegation-threatened Lancashire fought back with the ball on day two of their clash with title hopefuls Somerset.

On another rain-hit day at Aigburth, the hosts, 129-5 overnight, were bowled out for 185 as Alfonso Thomas (4-63) and Steve Kirby wrapped up the tail.

But Lancashire captain Glen Chapple (3-38) struck in each of his first two overs to reduce Somerset to 4-2.

Simon Kerrigan then took 3-47 to pass 100 first-class wickets as Somerset were dismissed for 149 to end the day.

The 21-year-old reached the landmark in his 31st game when he had Nick Compton leg before wicket sweeping for 22.

But the Somerset batsman also had reason to celebrate, having become the first player to hit 1,000 Championship runs this season when he reached 13.

"What an enjoyable day of Championship cricket that was, from Lancashire's gritty efforts with the bat this morning to their fine performance with the ball.

"They've bowled themselves into a handy position, a first innings lead of 36 runs which could prove crucial.

"Kyle Hogg's spell towards the end of the day was a prime example on a landmark afternoon for young spinner Simon Kerrigan."