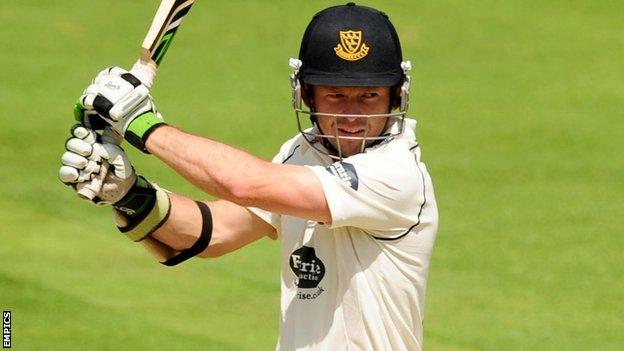 New Sussex skipper Ed Joyce led from the front with a century as he helped his side take control against Worcestershire at Hove.

Alan Richardson bowled tirelessly to take 4-67 from his 30 overs, adding Mike Yardy (33) and Joyce to his two early morning scalps.

But, by stumps, Sussex had an already daunting first-innings lead of 163.

Resuming at 22-0, Sussex looked in trouble when Richardson struck twice early on.

Richard Jones then trapped Murray Goodwin to leave the hosts 64-3.

But Joyce began the fightback in tandem with his predecessor as captain Yardy (33).

After the captain's departure, Wright carried on the fight, Steve Magoffin (29) and Ben Brown (28) also chipping in with runs.

"Worcestershire's morning but it's the only session they have won so far in the game, and the problems of bowling consistently have been highlighted again.

"Alan Richardson was again the pick of the Worcestershire attack with four wickets, but the other medium pacers bowled too many four balls and will have to bat well to get back into this game.

"And that's after they get Sussex out. Ed Joyce was a model of patience and hard work, while Luke Wright was about to let loose when he fell."