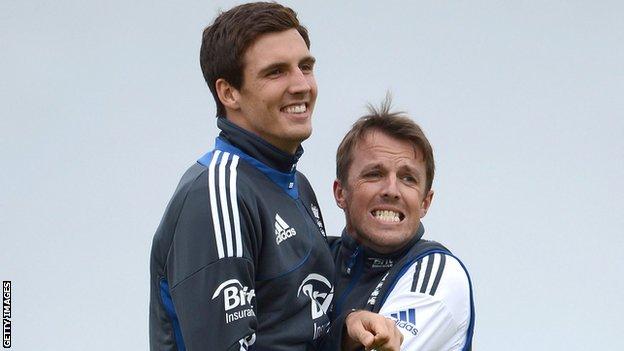 Former England spinner Phil Tufnell was shocked that off-spinner Graeme Swann was left out of England's team for the second Test against South Africa.

The Nottinghamshire man had played in each of England's previous 43 Tests.

His place went to Steven Finn, who played in a four-man pace attack as the tourists posted 262-5 on day one.

"Swann is one of the main reasons England have got to number one in the world and he's an integral part of the side," Tufnell told BBC Sport.

"I'd have been loath to drop my number one spinner."

Swann was part of the England attack that South Africa pummelled for 637-2 in the Proteas' innings victory in the first Test at The Kia Oval.

"I'd have batted first and I also didn't understand why they left Swann out, he's the best spinner in the world. I'm trying to work out why they fielded first, maybe they were worried about Steyn, maybe they felt they needed to take some early wickets to put South Africa under pressure."

Earlier in the summer, he was rested from the final two one-day internationals against Australia in order to protect an elbow injury.

Test Match Special summariser Tufnell, who took 121 wickets in 42 Tests, added: "It takes a very strong team to write that defeat at The Oval off as a bad day at the office. You start to wonder what it is you might need to change.

"There is also that slight worry over his elbow, so you wonder how much that came into it.

"I would have perhaps thought of playing five bowlers - with the strength of South Africa's batting you might need five bowlers to get through them."

England, who won the toss and asked South Africa to bat, were frustrated by an unbeaten century from Alviro Petersen but hit back late hit the day through late strikes from Finn and Stuart Broad.

Finn had earlier been the centre of controversy when he appeared to have visiting captain Graeme Smith caught at second slip, only for dead ball to be signalled by umpire Steve Davis because the bowler had knocked over the bails at the non-striker's end in his delivery stride.

With Finn having three times previously disturbed the stumps while bowling, it emerged that South Africa had complained that this was a distraction.

Umpire Davis agreed to call dead ball on each occasion that Finn hit the wickets, the first being when Smith was caught.

This was repeated throughout the day, including occasions when South Africa hit the ball for four.

"Either umpire shall call and signal Dead ball when the striker is distracted by any noise or movement or in any other way while he is preparing to receive, or receiving a delivery. This shall apply whether the source of the distraction is within the game or outside it. The ball shall not count as one of the over."

Read the full MCC statement on the Finn/Smith incident

A joint statement released by Marylebone Cricket Club (MCC) - who remain the guardians of the laws of the game - and the International Cricket Council said Davis was adhering to Law 23.4 (b) (iv).

That law states that a dead ball may be called if "the striker is distracted by any noise or movement or in any other way while he is preparing to receive, or receiving a delivery. This shall apply whether the source of the distraction is within the game or outside it."

The statement continued: "A precedent may have been set but it remains to be seen whether dead ball will be called on each occasion that this happens for the remainder of the match.

"Unlike some other Laws, there is no specified warning procedure for this situation. MCC's Laws sub-committee will discuss the matter at its next meeting and will work closely with ICC on issuing guidance to umpires."

However, England paceman James Anderson said that Finn was given no prior warning that dead ball would be called if he continued to disturb the stumps.

"Finny was told to be careful but at no stage was he told he would be dead-balled if he did it," said Anderson.

"It's a frustrating one. The umpire didn't warn us, so we were slightly perplexed. The batsmen were saying it was distracting, they've been in the umpire's ear."