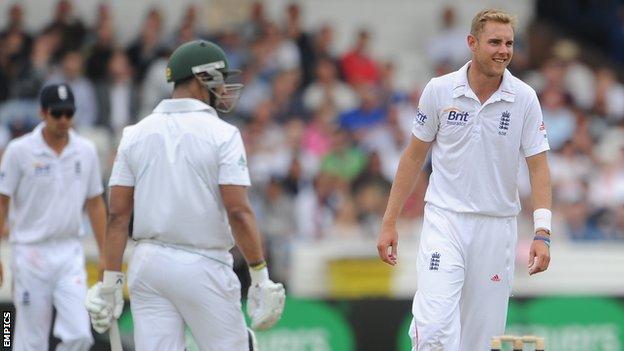 The home side reached the close on 48-0 after South Africa were bowled out for 419, with Broad taking 3-96.

"It's pretty even," said the 26-year-old. "Being none down overnight was vital for us and the first hour on Saturday will be huge.

"We need to settle in and build and build as a big a total as possible, then try and put them under pressure."

Broad is part of a four-man England seam attack after the home side opted to omit off-spinner Graeme Swann.

However, it was the part-time spin of Kevin Pietersen that brought England their first wicket of the day, when Jacques Rudolph was stumped off a ball that turned sharply.

"Rudolph was unlucky because it was the only ball that turned all day," added Broad. "There were some raised eyebrows when that ball turned, but nothing after that to worry about.

"This wicket will get lower and that's where our four quick bowlers can come into their own."

"I don't know why England played four seamers or why they bowled first, but they gave the initiative away and now it's nearly impossible for them to win the game. It's all about if England can save it or South Africa win it, but I think they will save it. The chances of England winning are very small. But Strauss came out and batted well tonight, playing some lovely shots."

Following their win in the first Test at The Kia Oval, South Africa can take the series and with it England's place at the top of the world rankings if they are successful at Headingley.

England invited the Proteas to bat after winning the toss in Leeds, but Broad said England were not worried by the total the visitors posted.

"There's always expectation when you win the toss and bowl but I don't think the wicket was dangerous to bat on," continued the Nottinghamshire man.

"When the sun is out, it's fantastic for batting but cloud cover provides encouragement for the bowlers.

"Our priority is to be patient with the bat and to go as big as we can."

South Africa were indebted to Alviro Petersen, who converted his first-day century into a Test best 182 before being caught behind off the bowling of Broad.

However, the opening batsman is to undergo a scan on a hamstring injury that could prevent him from batting in the second innings.

Assistant coach Russell Domingo said: "It would have been great to have got one or two wickets this evening, but I thought we bowled really well in the last five or six overs, so we're pretty happy with where we are at the moment.

"At the start of play yesterday, if someone had said you're going to be 419 all out we'd have taken it.

"If we can get a 100-run lead or anything like that it will be a big factor on this surface.

"We know that statistically Headingley is a 350-type wicket so we feel that we have a good score."