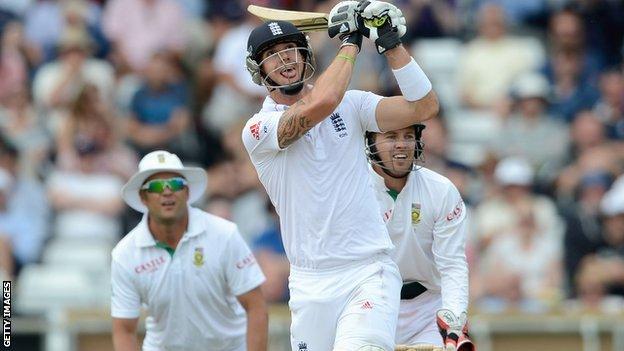 England batsman Kevin Pietersen says he is in the best form of his career after scoring 149 not out on the third day of the second Test against South Africa.

The 31-year old dismantled the Proteas attack, hitting 22 fours and a six, to help the home side to 351-5, 68 behind the tourists at Headingley.

"The knock that I've seen today reminds me of bowling to Brian Lara, a bit of a genius

"South Africa have an unbelievable attack, to get runs against them is something I'll always cherish."

Pietersen averaged only 11.16 in the Test series defeat by Pakistan earlier in the year and said that Saturday's century came as a result of the work he has done following the disappointment in Abu Dhabi and Dubai.

"I got a big wake-up call during the Tests against Pakistan," added the Surrey man.

"I was a bit overweight, physically not in as good nick as I should have been for that series. That wasn't good enough and I took it on the chin. Since then I've put hours of practice in and hard work pays off."

Pietersen also praised James Taylor after the debutant hit 34 in a fifth-wicket stand of 147 that rescued England from 173-4.

"He got through some really tough spells for us today," said Pietersen. "We have an engine room of Matt Prior, Tim Bresnan and Stuart Broad, so hopefully they will benefit tomorrow because of the hard work he did today.

"We have to play well tomorrow [Sunday]. There's no point having just one good day in a Test.

"We have to bat as long as possible tomorrow and not give away all the good work that was done today."

A poor day for South Africa was compounded by an injury to captain Graeme Smith, who had to be helped off late in the evening session after jarring his knee while fielding.

"It was an amazing innings. There was one extraordinary shot against Jacques Kallis where he came down the pitch and hit him on the rise past mid-on's right hand, and a remarkable shot after the second new ball where he nearly took Dale Steyn's teeth out with a straight drive back at his head."

Any serious damage would be an additional blow after first innings centurion Alviro Petersen was unable to take the field because of a hamstring strain.

He will not be able to bat until number seven at the highest, with bowling coach Allan Donald saying any injury to Smith would give the Proteas "something to look at".

Donald also praised the "genius" of Pietersen, saying: "The knock that I've seen today reminds me of bowling to Brian Lara, a bit of a genius.

"He played a magnificent innings to get England back into this Test match.

"I'm really not sure what more we could have done. You have to take your hat off to him because he played seriously well."