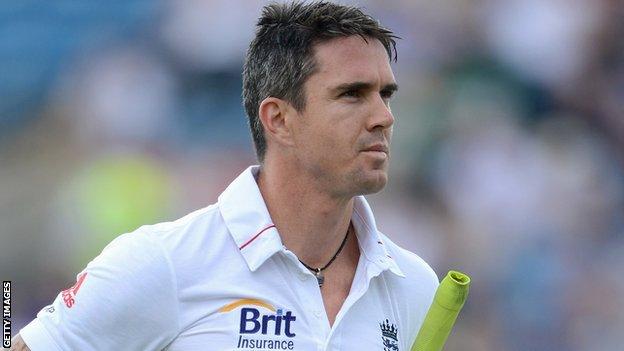 Kevin Pietersen has hinted that the third Test against South Africa at Lord's may be his last for England.

The 32-year-old batsman has been at odds with the England and Wales Cricket Board (ECB) since he quit limited-overs internationals in May.

He told the BBC's Test Match Special: "I can't give any assurances [that the next Test will not be his last].

"I love playing Test cricket, but there are obstacles and I'll decide what happens at the end of the next Test."

His retirement from the shorter formats of the international game came after the ECB rejected his desire to play in Twenty20 internationals but not one-day matches.

Then, media reports in June suggested that he could play all three formats if he was granted permission to play in the entire Indian Premier League tournament in 2013.

That would have meant missing home Test matches against New Zealand next May.

However, the Surrey player said the availability for the IPL and the ICC World Twenty20 in September was only part of the discussions taking place with the ECB.

"That is two of many points and they are not the main two points," said Pietersen, who was named as man of the match for his 149 in the second Test at Headingley.

"There's other points that I'm trying to sort out in the dressing room.

"Family time is another point, but there's a lot of other issues more important that need sorting. After the next Test match we'll know a lot more.

"It's absolutely 100% not about money. There are clear things that I'm discussing, but there are other issues that need to be sorted."

Pietersen, who has played in 88 Tests, also expressed his anger that details of his discussions with the ECB had been made public.

"Did I leak anything to the media about the meetings I was having with the ECB? I never spoke to the media for one single second," he insisted.

"I never spoke a single word about anything that happened behind closed doors, or what I thought was closed doors."

The South Africa-born right-hander, who resigned as England captain after only three Tests in 2009 after a rift with then coach Peter Moores, also said he is aware of the concern his possible retirement would cause supporters.

"For me, the saddest part about all this is that the spectators love watching me play and I love playing for England," said the former Hampshire and Nottinghamshire man.

"The politics is what I have to deal with personally. It's tough being me and playing for England, it's tough."

Captain Andrew Strauss said the Pietersen controversy would not cause a distraction in the run-up to the third Test at Lord's, a match that England need to win in order to level the series and keep their spot at the top of the world rankings.

"It's always the case that you want to take anything that's happening off the field, put it to one side and concentrate on winning a Test match for England," said Strauss.

"It's important to stress that the team spirit in this England side over the past three years has been outstanding. It's something we pride ourselves on and will continue to."