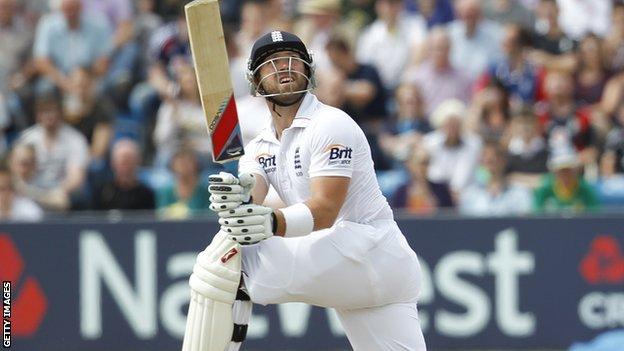 Following Kevin Pietersen's brilliant innings on Saturday, England had a real chance to put South Africa on the back foot on the fourth day at Headingley, an opportunity that they missed.

If you offered the home side the chance to get level with South Africa when they were four wickets down at tea on day three, they would have taken it, but cricket is a game of changes and you have to seize the moment when it arrives.

Pietersen missed a straight ball to be lbw to Morkel from the second delivery of the day and after that, Matt Prior aside, England offered little else.

The wicketkeeper received little support from the lower order and Stuart Broad in particular should be cross with the shot that he played.

To spin, or not to spin?

"England go to Lord's needing 20 wickets and it has been the hardest ground of all to get 20 wickets. If conditions are good and it's a dry week I think they are going to have to gamble and go with spin."

When there is a batsman going well, as Prior was, it is the responsibility of the man at the other end to support him, look for the singles and give the senior partner the strike, just as the impressive James Taylor did on Saturday.

When he's playing well, Broad is a very good-looking batsman but he does have the habit of finding ways to get himself out, which he did today by playing across the line to Imran Tahir.

In contrast, Prior was brilliant. He's the most selfless cricketer, always willing to play for the team. The Sussex man is very difficult to bowl at and makes things happen when he's at the crease.

For him to play as well as he did today, and in that manner, makes it all the more infuriating that he has not nailed down a place in the England one-day side.

To score the volume of runs he does, at such a high strike rate, you would think he would be ideal to play in England's limited-overs side, but he has had lots of chances in lots of different places in the order and has never quite got it right.

One reason for that could be because he's very strong on the off side and in one-dayers bowlers tend to bowl a lot straighter.

Despite that knock of Prior's, the weather has now left this match destined for a draw, which means England will have to win the third Test at Lord's if they are to level the series.

Aggers on the Olympic archery

"Being part of the Olympics was a dream, as a broadcaster you're always trying to do different things and I'm lucky that I've had the opportunities. It was a challenge and I was taken out of my comfort zone but it was a really good experience. Archery is a ruthless sport, very quick and very easy to get involved if you are a spectator. The nerve that archers show is incredible. Lord's looked fantastic and now they have just under two weeks to get the ground ready for the third Test."

Full coverage of the Olympic archery from Lord's

Taking 20 wickets at the home of cricket can be tough, so England will have to give serious consideration to playing five bowlers.

If they decide to stick with a four-man attack, one of which is likely to be Graeme Swann, then it adds an extra little layer of context to the fifth day.

In all likelihood, Steven Finn would be the seamer to miss out at Lord's but if he takes five wickets on Monday then he would become very difficult to leave out.

In this Test, the tall Middlesex man had to deal with his deliveries being called "dead ball" every time he hit the stumps in his delivery stride.

When he bowled today, he managed to avoid clattering the stumps, so an alteration has already been made.

I haven't seen exactly where he's landing, but I presume he's gone a bit wider. What is for certain is that he will have to change his action and I'm sure he and the coaching staff are working on it already.

He will need a slight bit of remodelling because he has still got to get close to the wicket. He's right to want to bowl wicket to wicket, but not if he is going to be dead-balled regularly.