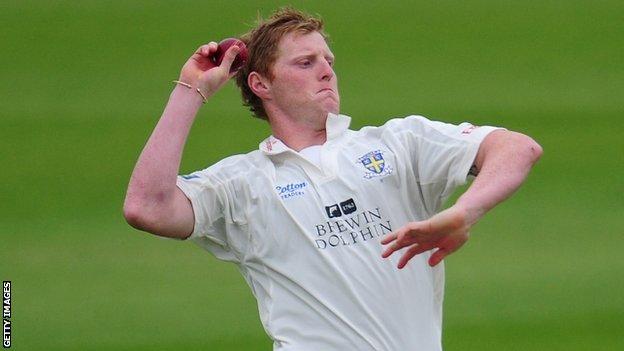 Durham's Ben Stokes produced his best bowling performance of the season as 14 wickets fell on day one in his side's Championship match against Surrey.

Stokes took 4-40 and Chris Rushworth claimed 3-36 as Surrey were bowled out for 129 with no player making 30 runs.

Despite Batty's claims that it was better to bat first, he was clearly wrong

The hosts, who are currently bottom of Division One, made an unconvincing start to their reply at Chester-le-Street as they reached 119-4 at stumps.

Surrey's Tim Linley claimed the wickets of Will Smith and Stokes, while South African Keaton Jennings was run out for 23 in his first County Championship appearance of the season.

Surrey skipper Gareth Batty won the toss and elected to bat but his decision did not pay off as the visitors were dismissed for 129 - the fourth time this year where they have failed to reach 150 in their first innings.

Both sides are aiming for only their second four-day win in 2012 and Durham will resume 10 runs behind with Dale Benkenstein and Paul Collingwood unbeaten on 40 and 17 respectively.

"The little yelp of delight from Durham captain Paul Collingwood was clearly detectable when his opposite number Gareth Batty said he'd bat after winning the toss.

"Collingwood clearly knew what was coming and, despite Batty's claims it was probably better to bat first than later, he was clearly wrong.

"This is a ground where batting points have only been managed by any side in two innings this summer.

"If you take Durham's one-off score of 277 against Warwickshire out of the equation, the average first innings total is 122, so Surrey finished seven beyond the par score.

"The 61 stand late on between Collingwood and Dale Benkenstein could prove vital in the final outcome of this game, given the fact only three partnerships have gone past 100 at Chester-le-Street this season."