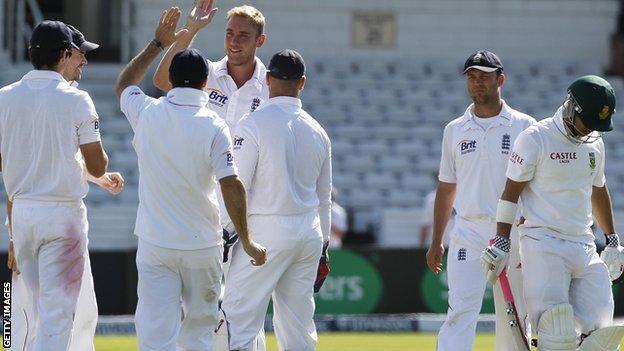 South Africa preserved their 1-0 series lead as the second Test with England finished in a draw after a captivating final day at Headingley.

The tourists resumed on 39-0, only 33 runs ahead, and skipper Graeme Smith extended his partnership with Jacques Rudolph to 120.

Kevin Pietersen removed Rudolph with his second delivery of part-time off-spin and took a Test-best 3-52, while Stuart Broad (5-69) struck with successive deliveries in a spell of 4-12 from 20 balls before South Africa declared on 258-9.

"We gave them a little scare but I thought it was too big a task to score those runs. I don't blame England for trying. We haven't seen the real England - where is that bowling that can bowl teams out? How do you leave Swann out with three left-handers and footholes galore? Bresnan is not getting any runs so you have to judge him as a bowler and I think they will go with Finn at Lord's."

Pietersen, named as man of the match following his first-innings 149, hit three fours in the opening over and a burgeoning crowd sensed something momentous, but he spooned a catch to mid-on from the opening ball of the third over.

Alastair Cook hit a huge six in his 46, and even when he departed in the 18th over with 163 still needed, England sent out Matt Prior at number five.

His run-out for seven spelt the end of their attacking aspirations and South Africa now go into the final Test at Lord's, starting on 16 August, needing merely to avoid defeat to win the series and depose England at the top of the Test rankings.

Any chance of anything other than a draw had seemed remote with only one wicket down at lunch, after a morning session hampered by two stoppages for rain in front of a crowd containing almost as many stewards as spectators.

Rudolph calmly completed his half-century from 92 balls, his 11th Test fifty, but after less than five overs the players were off again as another shower drifted in between the sunshine.

The impromptu opener guided Anderson through the slips to record the century partnership from 194 balls, his contribution 65.

Tim Bresnan was one of the few bowlers to find an edge that carried but Smith was dropped by Anderson on 44, diving to his right at second slip.

However, as in the first innings the breakthrough came from an unlikely source - the occasional spin of Pietersen, who had taken only five Test wickets prior to this match.

He found some movement away from the left-hander to trap Rudolph lbw, a decision upheld after review, and after lunch produced some more prodigious turn, which had England followers again contemplating the omission of regular spinner Graeme Swann.

After being convinced Smith had edged a sharply turning off-break to wicketkeeper Prior, Pietersen dismissed his nemesis for 52 to a catch by debutant James Taylor at short leg.

AB de Villiers, promoted above the injured Jacques Kallis, quickly asserted himself with two attractive boundaries and a three in an over from Bresnan and defused any anxiety over Pietersen by reverse-sweeping him for four.

The Proteas wicketkeeper should have been dismissed on 23, when Anderson fumbled another routine chance at slip off Pietersen.

But Pietersen, whose international future is the subject of increasing speculation, claimed a third wicket when Hashim Amla drove a full toss to mid-off where Cook held an outstanding diving catch.

Kallis defied his back problems to loft Pietersen down the ground for six and played a series of majestic strokes, though it was Broad who took the match into a new dimension.

He had De Villiers adjudged lbw by umpire Steve Davis, a decision that could not be reviewed because the visitors had no referrals remaining - though, had it been, the batsman would have been reprieved as the ball was heading comfortably down the leg side - and got JP Duminy in a tangle with a yorker that also saw him leg before.

Broad dismissed Vernon Philander and Kallis in consecutive overs and after tea Dale Steyn was spectacularly caught and bowled by Anderson.

After some brief lusty blows from Morne Morkel ended with a catch on the boundary that gave Broad a sixth Test five-wicket haul, Smith surprised everyone by declaring, leaving England with the choice of whether to push for victory or risk a series defeat.

For a time, all four results remained a possibility, but England now travel to the home of cricket in the hope of a victory that will maintain their four-year unbeaten record in home Test series.