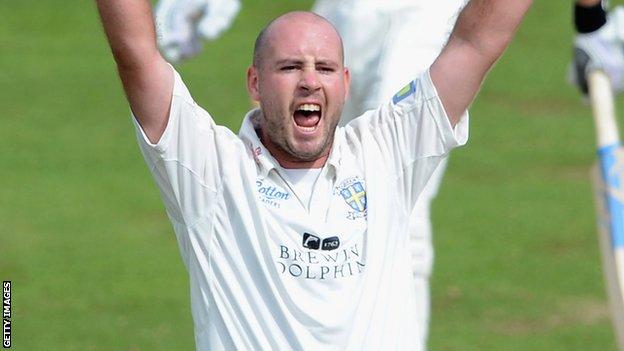 Durham paceman Chris Rushworth claimed a career-best 5-44 on a day when 19 wickets tumbled at Chester-le-Street.

But the relegation-haunted bottom side showed that they still have some teeth as they made Durham struggle to 215-9.

Only England contender Ben Stokes (78) looked at home, as Gareth Andrew (5-74) was backed by a brace each for Alan Richardson and Chris Russell.

In-form Durham, seemingly doomed to relegation themselves a month ago, had won three on the spin going into this game.

And Rushworth soon showed his liking for both Pears and Bears batsmen as he improved his career-best for the second time in two months, having taken 5-46 against Warwickshire on this ground earlier this summer.

He was well supported by Onions, whose efforts came on top of completing a 10-wicket match haul in helping to beat Notts in Durham's last game - and took him past 350 dismissals in first-class cricket.

"I wonder what ECB pitch inspector Jack Birkenshaw will make of 19 wickets falling in a day here at Chester-le-Street? Probably very little because, in the context of this bizarre season, that was a normal day!

"It was by no means an easy wicket to bat on but, as things stand, a fine 78 from Ben Stokes seems to be the difference between the two sides at the moment.

"The hosts start day two in a strong position, 95 runs ahead, having bowled out Worcestershire for 120, the visitors' lowest score in a Championship match against Durham."