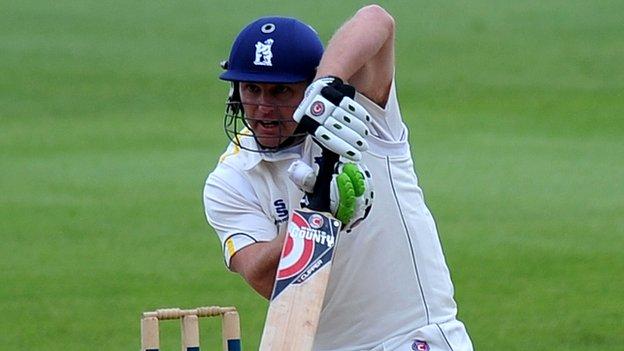 Veteran Warwickshire all-rounder Darren Maddy has signed a new contract extension for the 2013 season, taking him into his 40th year.

The 38-year-old, who became Bears captain soon after joining from Leicestershire in 2007, is in his sixth season at Edgbaston.

"Madds is a great role model to the rest of the squad," said Warwickshire director of cricket Ashley Giles.

"He's won many trophies, keeps himself very fit and always works on his game."

Maddy played three Test matches for England, as well as eight one-dayers and four Twenty20s in an international career lasting almost a decade between May 1998 and September 2007.

He has twice won the County Championship with Leicestershire, with whom he has also twice won the Twenty20 title - and he was part of Warwickshire's successful CB40 triumph in 2010.

"It's a great asset to have one of the most successful players in the modern era of county cricket in our squad," added Giles.

But, having hit eight centuries in 63 first-class matches for the Bears, Maddy insists that there is still more to come from his time with the current County Championship leaders.

"My desire to win cricket matches is as strong as it's ever been," said Maddy, who handed over the captaincy to Ian Westwood at the end of the 2008 season.

"I'm thrilled to be able to extend my deal with Warwickshire for an extra year."