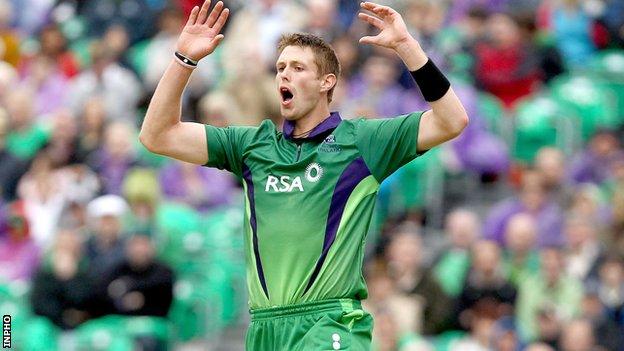 Fast bowler Boyd Rankin, 28, is to end his Ireland career in the hope of earning a Test call-up for England.

Rankin's Ireland contract expires at the end of December so he will be available for the ICC World Twenty20 competition in September.

"I have genuine ambitions of playing Test cricket and I have to give myself the best chance to do that," he said.

Rankin has signed a new three-year deal with Warwickshire, ending speculation of a possible move to Somerset.

The contract extension will keep him at Edgbaston until the end of the 2015 season.

"I feel I can't continue to play the amount of cricket I have been playing with Warwickshire, England Lions and Ireland over the last few years," continued Rankin.

"It has become increasingly difficult to play for three different sides throughout the year as it leaves me with little time for rest and recovery, which helps reduce my chance of injury."

Rankin follows Ed Joyce and Eoin Morgan is switching his international allegiance from Ireland to England, although the former later returned to Irish duty.

"Boyd has been a superb strike bowler for us, particularly in World Cups and qualifying tournaments," said Simmons.

"Time and time again he took vital early wickets and the new ball partnership he has forged with Trent Johnston has been one of the main reasons for our success since 2007.

"His extra pace and the lift he generates with his height made him a very dangerous proposition for our opponents and none relished facing him."

Cricket Ireland's performance director Richard Holdsworth said Rankin had been offered a "significantly improved contract" to remain with the Irish squad but "unfortunately we were unable to compete with the lure of Test cricket and the financial rewards of being a potential England cricketer".

"This further loss only strengthens our aim of becoming a full member of the International Cricket Council and ultimately a Test-playing country," added the Cricket Ireland official.

"This will be the third Irish player we have lost to the England cause in just six years, notwithstanding Ed Joyce's return.

"It is our strong view that we must be given the opportunity very soon to finance a full-time international programme and centrally contract all our players in order to halt this exodus.

"We were very grateful for ICC's recent boost to our funding to permit us to implement a domestic first-class structure in 2013 and play more international fixtures against the full members.

"However it is becoming increasingly obvious that only an accelerated pathway towards the financial benefits and opportunities afforded to the full members, allied to a change in eligibility regulations, will allow us to keep hold of our home-grown developed players.

"ICC has an excellent ambition to ensure that there are more competitive nations on the world stage - indeed the terrific TAPP initiative is designed for this very purpose.

"However, this will not be realised if its next best non-Test nation is merely a breeding ground for the England team."