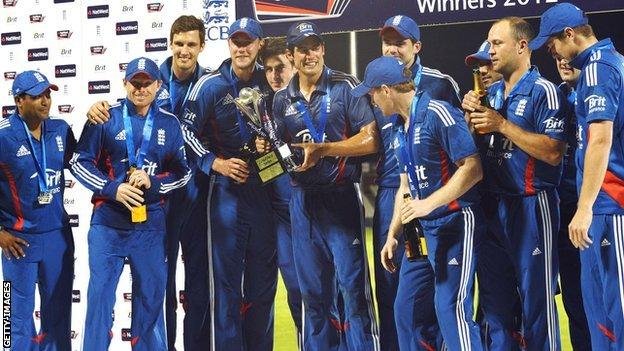 England have moved to the top of the world one-day international rankings for the first time.

Alastair Cook's side, who are also top of the Test rankings, lead South Africa by one sixth of a point.

Current World Cup holders India rise by one place into third, while Australia are off the top of the rankings for the first time in nearly three years.

However, world champions England have been replaced at the top of the Twenty20 rankings by South Africa.

Under Cook, England's 50-over side have won 10 consecutive matches in 2012 - including the recent 4-0 series win over Australia.

However, despite becoming the number one Test side in the world last August, their ODI form has not always been as consistent.

A 3-0 win over India at home last September was followed by a 5-0 defeat in the return series the following month.

They are also in a battle to retain their status as the world's best Test side - Andrew Strauss's men needing to beat South Africa in the third and final Test of the series at Lord's.

The Proteas, who could replace England if they avoid defeat at Lord's on 16-20 August, have already moved above England in the Twenty20 format.

They lead by a single point ahead of five one-day internationals and three T20s which round off their tour of England.

Both teams will then travel to Sri Lanka for England's defence of their World Twenty20 crown, later in September.